Kigali, Rwanda, 23 June 2022 – Today, alongside the 26th Commonwealth Heads of Government Meeting in Rwanda, leaders from around the world will meet to make bold commitments toward ending Malaria and Neglected Tropical Diseases (NTDs).

Hosted by His Excellency Paul Kagame, President of the Republic of Rwanda, and co-convened by the RBM Partnership to End Malaria and Uniting to Combat NTDs, the high-level Summit will serve as a landmark moment to renew commitments and call for more significant investments to end Malaria and NTDs, a group of 20 diseases, most commonly affecting some of the world’s most vulnerable people.

During the Summit, Heads of Government, communities, business leaders, and philanthropists will highlight how ending Malaria and NTDs can “unlock the potential” for countries to build a safer and healthier world. Through high-level panels on integration, innovation, and health financing, the Summit will outline how investment towards ending these diseases will save more lives, improve equity, drive economic growth, and build resilient health systems capable of detecting and responding to current and emerging diseases.

Professor Claude Mambo Muvunyi, Director General, Rwanda Biomedical Center said: “It is wonderful to see so many leaders and sectors come together in Kigali today to make high-level commitments to reinvigorate action towards Malaria and neglected tropical diseases. Incredible progress over the last two decades proves that ending Malaria and NTDs is a worthy and achievable goal. We must all play our part in ending undue suffering, so we can improve the health of nations worldwide, unlock stronger economic growth and deliver a better future for all.”

The Malaria and NTD communities are calling on global leaders to renew commitments to end Malaria and NTDs, endorse the Kigali Declaration on Neglected Tropical Diseases matched with financial commitments, and deliver a fully resourced Seventh Global Fund Replenishment later this year to support Malaria programmes around the world.

This is a critical year in the fight against Malaria, following the stalling of progress in recent years. Plateauing of funding, rapid population growth and widespread insecticide resistance have played a part, with disruptions of essential services and supply chains during the COVID-19 pandemic putting further strain on the fight against Malaria. In 2020, 627,000 lives were lost to Malaria – the highest in nearly a decade. Commitments made by leaders at the Kigali Summit and investing funds totalling at least US$18 billion at the Global Fund’s Seventh Replenishment in the United States this September would enable countries and partners to re-energise the fight against Malaria, strengthen health systems, and invest in the research and innovations needed to end Malaria for good.

Interim CEO of the RBM Partnership to End Malaria, Dr Corine Karema said: “The response to COVID-19 has shown the critical importance of investing in strong public health systems that can both respond to endemic diseases, such as Malaria and NTDs, and build global resilience against pandemics and other health threats. We’ve also seen how important ongoing research and development is to combat global health threats. The RBM Partnership to End Malaria welcomes the incredible commitments that will be made at today’s Summit and urges further action and support for science, as only by working together can we truly unlock the potential of countries to build a healthier, safer and stronger world.”

To date, 46 countries have eliminated at least one NTD, and 600 million people no longer require treatment. Cases of diseases that have plagued humanity for centuries, such as sleeping sickness and Guinea worm disease, are also at an all-time low. That said, services for NTDs were hit hard during the COVID-19 pandemic, threatening to unravel years of progress. The global NTD community is calling on affected countries to prioritise the ending of NTDs by endorsing the Kigali Declaration on NTDs. The high-level declaration will build on previous success and provide the opportunity to mobilise the political will, community commitment, resources and action needed to end NTDs.

Executive Director of Uniting to Combat Neglected Tropical Diseases, Thoko Elphick-Pooley said: “Achieving a world that is free from Malaria and NTDs requires new investments, strategic partnerships across sectors and increased resources for disease surveillance – with endemic countries leading the way. The long-awaited Kigali Summit on Malaria and NTDs presents a massive opportunity to improve the lives of billions. Now is the moment to be 100% committed to end Malaria and NTDs, to endorse the Kigali Declaration, and to leverage these investments to protect against future threats too.” 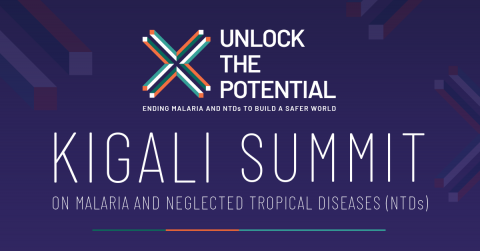