Following the launch of the Sahel Malaria Elimination Initiative (SaME) by the Ministries of Health from 8 countries - Burkina Faso, Cabo Verde, Chad, Mali, Mauritania, Niger, Senegal and The Gambia, 31 August 2018, Dakar, the RBM Partnership to End Malaria, in collaboration with the WHO and the Global Fund organized the Sahel National Malaria Control Programme Managers and Partners Orientation Meeting in Saly, Senegal, 17-21 September 2018.  Seven out of eight Sahel countries involved in the initiative were represented at the meeting, along with a number of partners including ALMA, USAID/PMI, MMV, PATH/MACEPA, Elimination 8, Speak up Africa, CRS, the Government of France, through the French 5% Initiative, and the Government of Monaco.

Participants had the opportunity to review specific country programmes, evaluate their strengths and bottlenecks, and emphasize ways in which national policies could be realigned with the WHO Global Technical Strategy for Malaria 2016-2030 and the Framework for Malaria Elimination. Countries presented specific situational analyses, discussed and finalized the draft of the SaME Regional Strategy (together with its mid-term review schedule), and developed a draft sub-regional malaria elimination Scorecard accountability tool to track progress and identify actions to address bottlenecks.

Additionally, the “Zero Malaria! Starts with me" campaign was presented to the participants as a society-wide movement aimed to accelerate the achievement of malaria elimination goals by 2030 in the countries involved in SaME. Discussions were carried out on the required additional technical support for each country to implement the campaign through the optimal use of it Toolkit.

Other recommendations targeted the resource mobilization strategies and the specific fundraising efforts that countries need to undertake domestically, as well as the country technical assistance needs that the eight countries can put forward at any given moment to benefit from relevant support provided by the RBM Partnership. The way forward forwarded and daft implementation plan for the coming months was developed.

Partners present at the meeting (in particular GF, USAID/PMI, ALMA, Speak Up Africa, WHO, RBM, CRSPC) had the opportunity to assess their up-to-date involvement and reflect on ways to maximize their continuous commitment to the implementation of SaME. 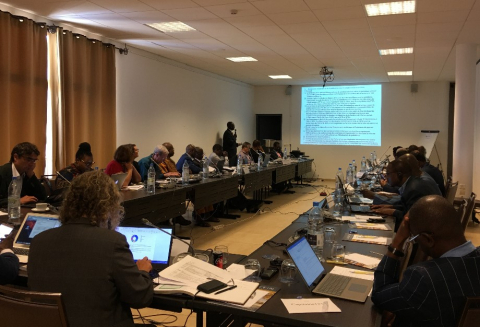