Geneva, 21 April 2022 – On World Malaria Day, 25 April, the global malaria community is uniting to celebrate global efforts made to end malaria and call for sustained political action and increased investment to turbocharge progress against the disease.

The RBM Partnership to End Malaria is uniting with partners across the globe to call on all stakeholders, including Heads of State and global health leaders, to make 2022 a pivotal year in the fight against the disease and to meet the Global Fund’s Replenishment target of at least $18 billion to fund malaria, HIV and TB programs from 2024 – 2026. This investment is expected to save 20 million lives from malaria, HIV, and tuberculosis, reduce malaria cases and deaths by more than 60%, and eliminate malaria from at least six countries by 2026.

Across the world, events are taking place, attended by Governments and key global health leaders to keep malaria high on the agenda ahead of the Kigali Summit on Malaria and Neglected Tropical Diseases, the Global Fund’s Seventh Replenishment Conference later this year.

Despite the extraordinary progress against malaria over the last two decades, data shows that the global malaria burden is higher than previously estimated, while COVID-19 disruptions and other challenges such as increasing drug and insecticide resistance and humanitarian emergencies have increased malaria deaths in 2020.

Dr. Corine Karema, Interim CEO of the RBM Partnership to End Malaria, commented: “Since 2000, the global partnership has halved malaria death rates and saved 10.6 million lives. Furthermore, the momentum we have built and the new tools, innovations, and initiatives we have developed thanks to previous investments have set the stage for us to accelerate progress.

However, we are now at a precarious juncture. The gains we have made are under threat at a time when half the world is still at risk from this deadly but preventable and treatable disease. By uniting with partners across the world, our message to all stakeholders, including Heads of State and global health leaders, is loud and strong - it is critical we see a fully replenished Global Fund. This offers the best opportunity we have to accelerate progress against malaria and help countries build resilient and sustainable health systems, also enabling them to better respond to future pandemics.”

To mark progress and commitments made in the global fight to end malaria and promote this year’s theme; ‘Advance Equity. Build Resilience. End Malaria’, countries and partners are holding events around the globe on and around World Malaria Day, including:

Marijke Wijnrocks, RBM Partnership to End Malaria Board Vice Chair and Chief of Staff, Global Fund to fight AIDS, tuberculosis, and malaria, commented: “It’s fantastic to see high level events taking place in both malaria-burdened and donor countries. We must not forget that the countries with the highest burden of malaria have the least ability to fund health services and have suffered the greatest economic impact from Covid-19. The Global Fund finances 56% of global malaria programs, and a fully replenished fund will greatly help these countries' ability to end these diseases and improve economic growth.”

Dr. Corine Karema continues: “I’m delighted to see partners worldwide working together to fight for what counts this World Malaria Day. Despite progress, the current set of new tools, such as the new malaria vaccine and next generation insecticide nets, will not be enough to eradicate malaria. Urgent action and investment are critical to enabling countries to scale up and use data-led strategies to tailor existing and new tools  and invest in advancing the development of the pipeline of transformative tools to save more lives in the future.”

Other events taking place around the world marking World Malaria Day include:

More information about the World Malaria Report 2021 is available at: https://who.canto.global/v/WorldMalariaReport2021/

World Malaria Day is observed on 25 April each year to raise awareness of the global burden of malaria, a preventable and treatable disease. Led by the global malaria community and the RBM Partnership to End Malaria, World Malaria Day educates citizens in malaria-affected countries on simple actions they can take to prevent malaria, highlights the impact of investments in ending malaria, and engages the community, national and global leaders to ensure ending malaria remains a priority on the global agenda. People around the world can join the conversation on social media by using the following hashtags: #WorldMalariaDay, #FightForWhatCounts, and #ZeroMalariaStartsWithMe.

A full list of events taking place worldwide can be found at endmalaria.org/WorldMalariaDay2022.

The RBM Partnership to End Malaria is the largest global platform for coordinated action against malaria. Originally established as Roll Back Malaria (RBM) Partnership in 1998, it mobilises action and resources and forges consensus among partners. The Partnership comprises more than 500 partners, including endemic malaria countries, their bilateral and multilateral development partners, the private sector, non-governmental and community-based organisations, foundations, and research and academic institutions. The RBM Partnership Secretariat is hosted by the United Nations Office for Project Services (UNOPS) in Geneva, Switzerland. 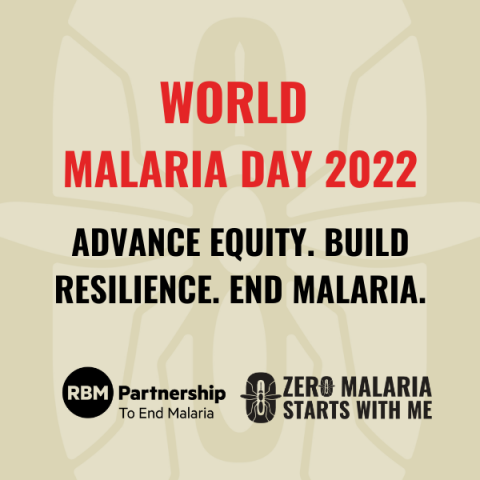