Geneva/Johannesburg/Kigali/Lagos/London/Nairobi, 25 May 2022 - A stellar cast of international changemakers have joined forces to turn up the pressure in the fight against malaria today, launching the second chapter of the multi-award-winning Draw the Line Against Malaria campaign.

In a world still reeling from the far-reaching impacts of the COVID-19 pandemic, with global health security and pandemic preparedness remaining at the top of world leaders’ agendas, the next chapter of the campaign aims to turn up the pressure on world leaders to commit to ending malaria at the Kigali Summit on Malaria & NTDs in June and investing funds totalling US$18 billion at the Global Fund’s Seventh Replenishment in New York this Autumn.

Accounting for over half of global funding to end malaria, a fully replenished Global Fund is projected to enable countries and partners to reduce malaria deaths by 62%, treat 550 million malaria cases, and eliminate malaria from six more countries by 2026, as well as unlock the potential of a Zero Malaria world, helping to strengthen equitable health systems and improve the lives and futures of millions of people.

Dr Tedros Adhanom Ghebreyesus, WHO Director-General says: “The World Health Organization welcomes a new host of scientists, youth, and champions to join the malaria fight at a crucial time when progress against the disease is lagging. Draw The Line provides a platform for Africa's most powerful narrators to change this trajectory, disrupt political apathy, and lead the fight to end this treatable and preventable disease which kills a child nearly every minute.”

Dr Corine Karema, Interim CEO of the RBM Partnership to End Malaria says: “In addition to the innovation of new tools, we must invest in the country health systems and programmes needed to ensure these tools and resources target the right people and right places, at the right time. The Global Fund plays a critical role in delivering lifesaving malaria services where they are needed most. This year, it is vital that we see a fully replenished Global Fund to get back on track and accelerate the malaria response to end this disease and strengthen health systems, creating a safer, healthier and more equal world for all.”

TEAMING UP TO FIGHT FOR WHAT COUNTS – LINE BY LINE

The fast-paced new Draw The Line film, directed by Grammy-winning Meji Alabi, builds on the ground-breaking momentum of the first phase of the campaign, delivering an urgent message highlighting the fight against malaria, whilst encouraging leaders that this is a fight we can win with the right arsenal of tools, strong funding commitments, and renewed political will.

David Beckham says: “I have supported the fight against malaria for many years and am proud to be a part of this amazing campaign, alongside many inspiring artists, athletes and champions from across Africa. This is a year of big opportunity and there is a way of curing this disease. World leaders have the power and responsibility to make change and create a safer, healthier, fairer world for all.”

The short film will be rolled out on channels and platforms across the world, including being showcased at the Paramount/MTV Africa Day Concert on 28th May 2022 in Johannesburg, ahead of the Kigali Summit on Malaria and Neglected Tropical Diseases being held on the eve of the Commonwealth Heads of Government Meeting (CHOGM) in Rwanda on 23rd June.

The Summit is a milestone moment in the malaria fight and enabler of game-changing political decisions including delivering on the commitment to halve malaria across the Commonwealth by 2023 and accelerate global efforts to cut malaria by 90% by 2030.

It is here that the Muundo artwork, as a representation of the collective will of young people, will be delivered to world leaders in Kigali. At the Summit, highly acclaimed Nigerian author Chimamanda Ngozi Adichie will participate as Chief Storyteller and the event will open with a performance from MTV/VMA award winning choreographer Sherrie Silver and her dance crew.

Pierre Emerick Aubameyang says: “I am proud to be a voice for this campaign at such a significant time with big decisions ahead. I caught malaria in 2021 when playing for the national team in Gabon where 100% of the population is at risk from malaria. It was a tough time, I was lucky to be able to get to a doctor, in time to make a full recovery, but so many people don’t have access to essential medical care, especially children. As a dad I find it totally unacceptable that malaria takes the life of a child every minute when it can be prevented, treated and cured.”

A SEMINAL YEAR IN THE MALARIA FIGHT: WHY NOW IS THE TIME TO STEP UP ACTION

The latest World Malaria Report figures show that disruption caused by the COVID-19 pandemic contributed to an additional 47,000 malaria deaths between 2019 and 2020, with a total of 627,000 lives lost to malaria in 2020 – the highest number in nearly a decade.

Children are especially vulnerable, accounting for 80% of malaria deaths in sub-Saharan Africa, with around 481,500 losing their lives across the Continent.

The increases in malaria cases and deaths seen in 2020 come on the back of years of plateaued funding, which has been compounded by emerging threats from the natural world, such as growing drug and insecticide resistance, as well as disruption to malaria prevention and treatment services caused by the COVID-19 pandemic and other humanitarian emergencies. The fight against malaria is at a precarious juncture, and without immediate and accelerated action further ground may be lost.

The latest figures also show that malaria places an even greater burden on fragile health systems than previously thought, reducing their ability to identify emerging diseases. Investments to end malaria are therefore a pathfinder for pandemic preparedness and response, helping build resilient and sustainable health systems and strengthening country capacity to fight this pandemic and be prepared for future threats.

The Draw The Line Against Malaria campaign was created by dentsu International, with art direction by artist Láolú Senbanjo and films directed and produced by Black Dog Films (part of the Ridley Scott Creative Group)  on behalf of the RBM Partnership to End Malaria in collaboration with global malaria partners and a coalition of agencies and non-profit organisations, including the African Leaders Malaria Alliance (ALMA), the African Union Commission, The Bill & Melinda Gates Foundation, Speak Up Africa, Impact Santé Afrique, Malaria No More UK, and Goodbye Malaria. 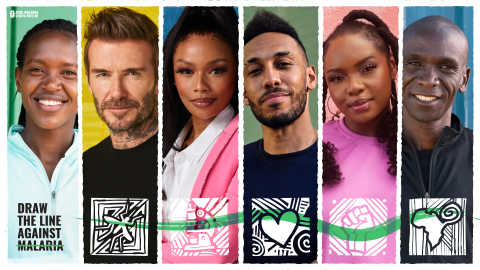