The Sahel Malaria Elimination Initiative (SaME) represents a coordinated sub-regional collaboration effort targeted at shrinking the malaria map through a multi-country platform and capitalizing on the specific epidemiological and ecological parallels. By exploiting these similarities, with a strong political commitment and sustainable capacity building, the countries in the Sahel region can attain substantial progress in malaria elimination. At present, eight countries are part of this initiative: Burkina Faso, Cabo Verde, Chad, Mali, Mauritania, Niger, Senegal, and The Gambia.

In order to enhance cooperation and co-ordination, the RBM Partnership engaged in a series of meetings bringing together Health Ministers, National Malaria Programme Managers,  and regional and international partners. The most recent event centered around SaME took place in Geneva on 24 May 2018, on the sidelines of the 71st World Health Assembly.

The High-Level Ministerial Lunch on the Sahel Malaria Elimination Initiative (SaME), held last week, created a new opportunity for a face-to-face meeting of country leads, the international community involved in malaria elimination, partner governments, and regional cooperation platforms. All eight countries were represented at a senior level, and the RBM Partnership had the particular privilege to welcome the Honorable Ministers of Health of Cabo Verde, Chad, Mauritania and The Gambia. The governments of France, Monaco and the United States of America were also present and reiterated their support to SaME.

This working lunch was co-moderated by the WHO Regional Office for Africa, a critical RBM partner in the development and advancement of this initiative. A number of international and regional organizations (WHO, The Global Fund, WAHO, ECOWAS, ALMA, E8, CEMAC, OCEAC) joined the meeting and renewed their commitment to this joint effort.

The main issues discussed during this working lunch included the major steps in the implementation of the initiative, the key roles and responsibilities and the way forward, and the lessons learned from other regional efforts with similar vocation. There was consensus that SaME would be ideally hosted by WAHO-ECOWAS, and the Honorable Minister of State Professor Awa Marie Coll-Seck of Senegal was designated future Ambassador of SaME. A draft declaration, embodying a number of concrete political commitments, was presented and open to review and inputs. The final Declaration will be discussed during the upcoming African Union Summit in Nouakchott (June-July 2018).

More information on the scope and objectives of SaME is presented in its draft Concept Note, available under the “Reference documents” section. The document is being continuously shaped and all relevant input (comments, suggestions) is welcome. 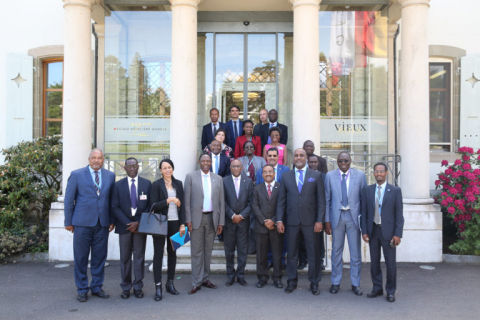