Friday 5th November 2021: Today, the RBM Partnership to End Malaria and Uniting to Combat Neglected Tropical Diseases have come together to urge for decisive action on climate change, to protect communities from endemic diseases such as malaria and neglected tropical diseases (NTDs) – a group of 20 diseases and disease groups which can debilitate, disfigure, and kill. By taking tough action on climate change, we can protect hundreds of thousands of lives from infectious disease and strengthen health care systems around the world.

As world leaders gather at the UN Climate Change Conference (COP26) in Glasgow, Scotland, both organisations warn of the impact that climate change has on health and infectious disease control. As the COVID-19 pandemic threatens years of hard-fought progress towards the 2030 Sustainable Development Goals, the impact that climate change has on the ability of countries with fragile health systems to cope with any increasing burden of disease, must be at the forefront of the conversation.

It is vital that efforts to mitigate climate change and deliver health-sensitive climate adaptation plans are accompanied by renewed leadership and investment in the fight against existing infectious diseases.

Currently, half the world’s population is at risk from malaria with 409,000 deaths in 2019, while NTDs affect more than 1.7 billion people globally.

Both malaria and NTDs are particularly climate sensitive. Both are highly influenced by changes in temperature and rainfall, as well as the frequency and severity of extreme weather events, such as cyclones. The World Health Organization (WHO) estimates that climate change will lead to 60,000 additional malaria deaths per year between 2030 and 2050 - an almost 15% increase in deaths from the preventable and treatable disease.[1] In addition, the London School of Hygiene & Tropical Medicine (LSHTM) recently forecasts that more than 8 billion people could be at risk of malaria and dengue fever (an NTD) by 2080 if greenhouse gas emissions continue to rise unabated.[2]

Climate change is expected to increase the spread of several NTDs as they are directly influenced by changes in temperature, rainfall, relative humidity, and climate. It has been estimated that 500 million more people could become exposed to mosquito-born NTDs such as chikungunya and dengue as these diseases spread to new geographies. By 2080 this figure doubles to one billion more people.[3] Leishmaniasis, an NTD that if left untreated is fatal, is very climate-sensitive, with small fluctuations in temperature increasing transmission and spread, which will see this fatal disease earmarked for elimination in new areas previously not endemic.

Africa is particularly vulnerable to both climate change and disease such as malaria and NTDs. The continent accounts for over 90% of the global malaria burden and 40% of the NTD burden, and bears the brunt of climate change impacts; home to 7 out of the 10 countries in the world considered most threatened by climate change.

RBM Partnership to End Malaria CEO, Dr Abdourahmane Diallo, comments: “Climate change and malaria are two defining challenges of our generation. Both disproportionately affect the poorest and the most vulnerable, especially in Africa, and may further jeopardize human wellbeing in the future. To achieve the 2030 Sustainable Development Goals for malaria, we need decisive action at COP26 as well as ongoing collaboration with sectors such as climate change groups. The decisions we make today will have real consequences and impact the progress that can be made to fight these deadly diseases.”

Thoko Elphick-Pooley, Executive Director, Uniting to Combat NTDs says: “Due to warmer climates, unpredictable and extreme weather, climate change will have a huge negative impact on infectious diseases like neglected tropical diseases. We are already seeing the effects of this, and it is felt most by the world's most vulnerable people, those who already face a disproportionate burden of neglected tropical diseases. There is an urgent need for collaboration to grapple with the interlinked challenges of climate change and infectious disease, in order to mitigate the impact. We must invest in community-based health systems so that we can future proof primary health care and save lives.”

There is a clear and direct relationship between climate and infectious diseases such as malaria and NTDs, and commitment from policymakers and experts from all countries will be necessary to preclude both a global health and climate crisis. Rising global temperatures present a significant risk that these diseases will emerge – or re-emerge – in non-endemic countries, and so it is critical that policymakers take action to control carbon emissions and keep global warming to 1.5C.

The global malaria community is already investing in strategies to tackle the issue. Last year, a unique group of global health, technology and public sector organisations – convened by Malaria No More – launched Forecasting Healthy Futures, a coalition of global health, technology and public sector partners. This initiative aims to develop weather data-informed strategies and policies to help governments and partners better time and target effective health interventions in the face of changing weather patterns and extremities. 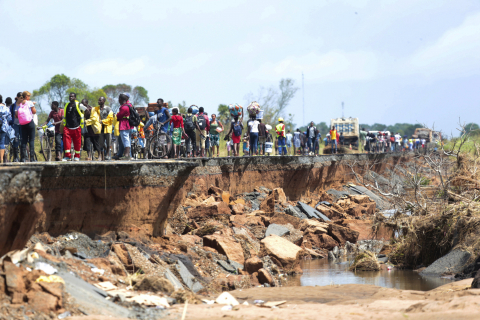