“Women, especially pregnant women and children, are disproportionately affected by malaria – an entirely preventable and treatable disease which puts half the world at risk and costs a child’s life every two minutes. It is therefore critical that we pay attention to gender aspects in the fight against malaria,” noted Dr Kesete Admasu.

“By joining the International Gender Champion network, the RBM Partnership to End Malaria will promote gender equality within its leadership and among its more than 500 partners ranging from malaria affected countries to private sector companies to research and non-profit organisations. We look forward to working with and learning from other Gender Champions in pursuit of our vision of a malaria-free world,” he added.

As part of joining the network, the RBM Partnership CEO committed to establish in 2018 an RBM Partnership Gender Task Force, bringing in members from throughout the Partnership, to ensure gender considerations are adequately reflected in the malaria sector. He further pledged to achieve gender parity in the RBM Partnership leadership positions and partnership mechanisms, including the Board, Partner Committees and Secretariat.

The RBM Partnership also contributed to the Global Health 50/50 report, launched on 8 March, focusing on gender equality in organisations working in or influencing global health. Global Health 50/50 is an independent initiative to advance action and accountability for gender equality in global health and contribute to the 2030 Agenda for Sustainable Developmen 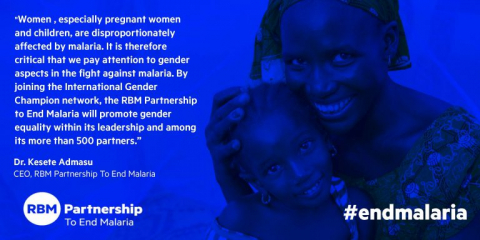