There’s never been a better time to invest in malaria

Maputo, 19 November 2018 – The RBM Partnership to End Malaria today calls on countries to step up their efforts and investment to end one of the world’s oldest and deadliest diseases.

Catalyzed by the World Health Organization (WHO) and the RBM Partnership, and supported by global partners, the “High burden to high impact: A targeted malaria response”, launched today alongside WHO’s World malaria report 2018, outlines new actions to reignite progress in the malaria fight.

Led by the countries hardest hit by malaria, which account for over 70% of the global disease, the “High Burden Response” is based on the four key elements:

The 500-plus members of the RBM Partnership to End Malaria stand with the WHO and high-burden countries in supporting this response plan to turn the tide back towards our global goal to end malaria.

Dr Winnie Mpanju-Shumbusho, Board Chair of the RBM Partnership to End Malaria says:

“It is unacceptable that people in half the world’s countries still fear death by mosquito bite while the other half are nearing a life free of malaria. The World malaria report calls for a decisive response; one that is owned and led by the countries most affected by the disease and support by global partners. Success in high burden countries will translate to success globally. The actions we take now are essential to increasing funding, identifying greater efficiencies and tailoring the optimal mix of tools to get malaria efforts back on track.”

“The Global Fund to Fight AIDS, Tuberculosis and Malaria has played a crucial role in securing the unprecedented progress in the global malaria efforts since its establishment in 2002. Next year’s replenishment of the Global Fund is a critical opportunity for renewing global investment in the malaria fight. Fortunately, there has never been a better time to invest in malaria: thanks to improvements in how we deliver life-saving commodities and reduction in costs for medicines and diagnostics mean every dollar invested in malaria goes further than ever before.”

“This year’s World malaria report shows that progress is uneven and the only way we can make progress is through working together to get back on track to driving down malaria cases and deaths. In countries where the malaria burden is highest, the disease continues to present an obstacle to growth and development. Malaria efforts are part and parcel of our collective ambition to reach the Sustainable Development Goals.”

“The UAE became malaria-free just over a decade ago and now we want to help other regions do the same thing. The region has provided substantial funding over recent years and I would urge other donor countries to do the same and help us reach the goal of malaria elimination even more quickly. I’m pleased that the World Malaria Report has shown that, thanks to global partnership efforts, in many areas great progress is being made, with 46 countries reporting fewer than 10,000 cases, up from 44 in 2016.”

“It is clear that the prevalence of malaria is closely related to many other challenges and crises faced by some countries, such as conflict and other health issues. It is these countries that need the most support in eliminating malaria, which is why I welcome the new country-led strategy outlined in the response plan, which will see great leadership of the highest burdened countries, in cross-border cooperation, and better implementation of the tools at their disposal to reach and protect the hardest to reach and most vulnerable from this deadly disease.

“I am concerned by the increasing cases of malaria across the Southern Africa region reported in this year’s data. In South Africa particularly, a cases have risen by over 400%, wiping out much of the progress made over the last few years. These trends cannot continue, and I welcome the new response plan which has been developed to combat malaria in high burden countries. I am therefore pleased to see the launch of this year’s World Malaria Report and the response plan taking place in Mozambique, one of the 11 highest burdened countries, which has committed to reducing the burden of malaria and taking action to get the fight back on track.”

“The latest World malaria report shows that globally more countries are moving towards zero malaria cases – in 2017 46 countries reported fewer than 10,000 such cases, up from 27 in 2010. We are hugely proud that Paraguay was certified malaria-free this summer. Furthermore, Argentina has made a formal request to WHO for certification and, for the first time, El Salvador has registered zero indigenous malaria cases in 2017. Whilst progress has slowed in some areas we must still celebrate the gains that have been made and I’m delighted that we are on track globally in eliminating malaria in at least 10 countries that were endemic in 2015.”

“The latest World malaria report highlights what can be achieved, as an increasing number of countries head towards elimination, while underscoring the challenges that remain in countries where malaria has its strongest foothold. With our partners, we have brought forward nine new medicines estimated to have saved 1.5 million lives to date. One of our roles is to continue the effort to further increase access to those treatments. In parallel, we are developing more effective and simpler medicines, to deepen impact, particularly in high-burden areas where the fight against malaria is most complex and challenging.”

“Although India is still one of the highest burdened countries with 4% of global malaria cases in 2017, I’m delighted to see it is making significant progress in bringing down its malaria burden. As reflected in this year’s World malaria report, the country reduced malaria cases by 24% since 2016, largely due to substantial declines of the disease in the state of Odisha, home to nearly half of all malaria cases in the country. In addition to political commitment and the right mix of tools, a key ingredient of Odisha’s success lies in its network of Accredited Social Health Activists, or ASHAs, who serve as frontline workers to deliver essential malaria services across the state.” 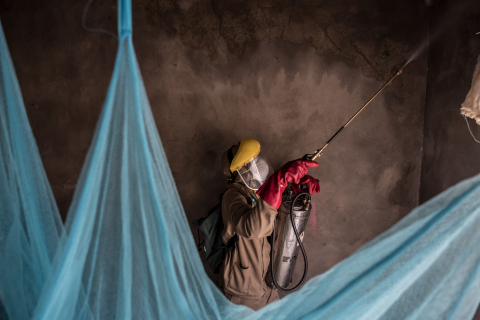