Convening in Biarritz, France, global leaders made a series of financial commitments towards the elimination of AIDS, tuberculosis and malaria. These contributions included:

These latest pledges follow the announcement made by Switzerland of its highest-ever contribution of CHF 64 million last week. Earlier this summer, during the G20 meeting in Osaka, Japan also announced its pledge of US$840 million, a 5% increase compared to its previous contribution, and the UK announced a pledge of £1.4 billion, representing a 16% increase

Furthermore, on 27 August, the Republic of Korea also signalled its intention to “significantly increase its pledge to the Global Fund for 2020-2022”, at a high-level symposium on Korea’s enhanced engagement and leadership in the fight to end malaria and tuberculosis as epidemics.

Meanwhile, at the 7th Tokyo International Conference on African Development (TICAD7) conference underway in Yokohama, Japan’s Minister of Foreign Affairs Taro Kono reiterated his country’s commitment to global efforts to end AIDS, tuberculosis and malaria during his remarks at the official side event focusing on progress and challenges of malaria elimination in Africa, convened by the RBM Partnership and Malaria No More Japan.

These latest commitments go a long way in contributing to the Global Fund’s ambitious target of at least US$ 14 billion to be raised for the 2020-2022 period that will help save 16 million lives, reduce the mortality rate for the three diseases by half and prevent 234 million new infections among the three diseases by 2023. The Global Fund’s Sixth Replenishment Conference will be hosted in Lyon, France on 9-10 October 2019.

“If we want to continue to protect hundreds of millions of people from malaria, a fully funded Global Fund is critical. We applaud significant contributions from countries all over the world, and we hope to see others follow suit in the lead up to the Sixth Replenishment Conference in October. With the incredible support of the Global Fund, we have achieved remarkable success against malaria, saving more than 7 million lives and preventing more than a billion cases of malaria since 2000.

“With malaria cases rising in the highest burden countries, the need to step up the fight is greater than ever. All countries, both malaria-burdened and malaria-free, must take responsibility for ridding the world of this deadly disease, and ensure that the Global Fund’s ambitious, but much needed target is met.”

Since the turn of the century, the Global Fund has played a crucial role in mobilising malaria resources and it is the leading international source of malaria funding, accounting for 60% of external funds available to target the disease. A fully funded Global Fund is therefore critical to achieving global malaria targets, including a 90% reduction in malaria cases and deaths between 2016-2030.

To date, malaria focused funding has reduced deaths from the disease by 42% in countries supported by the Global Fund and resulted in the distribution of 197 million mosquito nets in 2017 alone. The enduring efforts from the Global Fund has also been crucial in facilitating malaria elimination in countries such as Paraguay, Uzbekistan, and most recently, Argentina and Algeria.

To arrange an interview or find out more, please contact the RBM Partnership press office at Grayling on RBMPartnership@grayling.com or call +44 (0) 20 3861 3747. 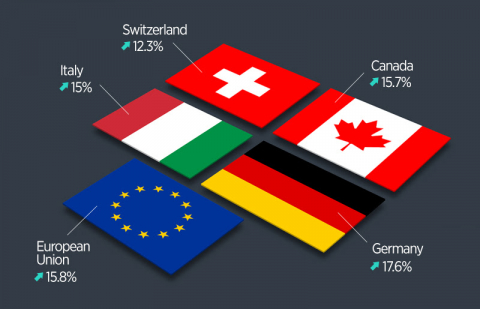