The RBM Partnership to End Malaria welcomes the Global Fund’s fundraising target announcement, calling for $14 billion to fight AIDS, tuberculosis and malaria over the 2020-2022 period.

Since its establishment in 2002, the Global Fund has played a catalytic role in mobilizing resources, helping increase malaria funding by 1,000%. Today, it is the leading international source of malaria funding, accounting for 60% of funds available to target the disease.

To date, malaria focused funding has reduced deaths from the disease by 42% in countries supported by the Global Fund and resulted in the distribution of 197 million mosquito nets in 2017 alone. The enduring support from the Global Fund has been key to helping more countries progress towards malaria elimination, including both Paraguay and Uzbekistan achieving malaria elimination certification in 2018.

Dr Winnie Mpanju-Shumbusho, Chair of the Board, RBM Partnership to End Malaria, said:

“A fully funded Global Fund is a prerequisite to continue protecting hundreds of millions of people from malaria and to ensuring global efforts continue to drive down malaria cases and deaths, at a time when the disease is resurging in some parts of the world and we are facing new threats including drug and insecticide resistance. Now is the time to step up the fight and renew our collective commitment to end malaria and other deadly diseases. All countries – malaria burdened and malaria-free-must step up their investments.”

However, even if the $14 billion replenishment target is achieved, a global malaria funding gap remains. As highlighted in the WHO World Malaria Report 2018, annual malaria funding will need to increase to at least $6.6 billion per year by 2020 to continue saving lives from this entirely preventable and treatable disease.

Funding remains an immediate barrier to achieving fast-approaching global malaria milestones and the funding gap highlights the need for continued efforts to find additional domestic and international resources. These will need to come from a variety of existing and new sources, including multisectoral interventions and the private sector. 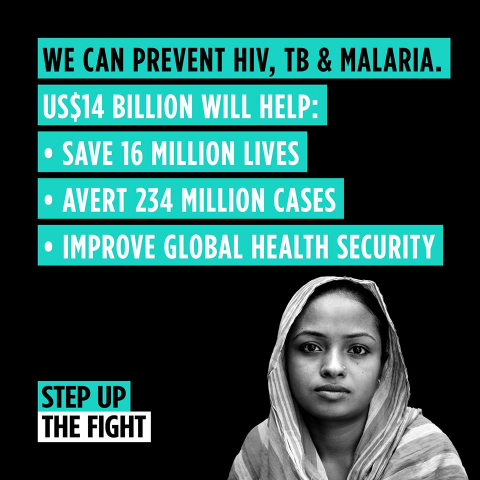