Geneva, 8 February 2021 - In line with the RBM Board Rotation Policy approved in November 2017, the RBM Partnership is seeking to appoint four new Board Members: three in May 2021 and one in November 2021. The details of the nomination and selection process are provided in this document.

To maintain the RBM Board’s diversity outlined in the RBM Bye-Laws, nominations from endemic regions are particularly encouraged to ensure that at least half of the Board Members are from malaria affected countries and regions. Moreover, nominations from the Asia-Pacific and Latin America / Caribbean regions are particularly welcomed to ensure the composition of the RBM Board reflects malaria’s global reach.

The deadline for receipt of nominations is Friday 12 March 2021 with the nomination and selection process due to conclude on Friday 30 April 2021.

Since 1998, the RBM Partnership to End Malaria (formerly Roll Back Malaria) has been central to the global fight against malaria. The past twenty years have seen tremendous gains in reducing the burden of disease and progressing towards malaria elimination.

Since 2000, the global partnership and solidarity has led to a historic progress against malaria, saving an estimated 7.6 million lives, preventing over 1.5 billion new malaria infections, and setting the world on a path to end the disease once and for all. As the global, multisectoral platform for coordinated action to end malaria, the RBM Partnership’s work will be instrumental in achieving the ambitious 2025 and 2030 malaria reduction and elimination targets and milestones, as well as Sustainable Development Goals (SDGs).

The list of the current Board Members can be found here: https://endmalaria.org/about-us/governance/board.

The RBM Partnership to End Malaria is the largest global platform for coordinated action against malaria. Originally established as Roll Back Malaria (RBM) Partnership in 1998, it mobilises for action and resources and forges consensus among partners. The Partnership is comprised of more than 500 partners, including malaria endemic countries, their bilateral and multilateral development partners, the private sector, nongovernmental and community-based organisations, foundations, and research and academic institutions. The RBM Partnership Secretariat is hosted by the United Nations Office for Project Services (UNOPS) in Geneva, Switzerland. endmalaria.org 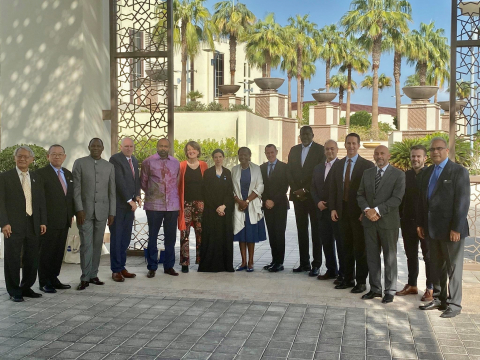