The RBM Partnership to End Malaria announced that Professor Maha Taysir Barakat, former Director General of the Health Authority Abu Dhabi, will serve as Board Chair of the Partnership as of 1 June 2019. She takes over from Dr Winnie Mpanju-Shumbusho, former Assistant Director General for HIV/AIDS, Tuberculosis, Malaria and Neglected Tropical Diseases, World Health Organization, who has completed her three-year term as Board Chair and will continue to serve on the Partnership’s Board.

Dr Mpanju-Shumbusho said: “As I hand over the RBM Partnership Board Chairmanship to Prof. Maha Barakat, I look back with gratitude, great satisfaction and pride on the terrific achievements we have made together, including reinvigorating the Partnership and accelerating the fight to end malaria for good. I thank all my fellow Board Members, RBM Partners worldwide and the Secretariat; and wish you all the very best as we progress the fight to end this terrible disease in every corner of the world, once and for all.”

Dr Abdourahmane Diallo, CEO of the RBM Partnership to End Malaria, said: “On behalf of the RBM Partnership, I would like to extend our deepest gratitude to Dr Mpanju-Shumbusho for her service as Board Chair over the past three years and especially for ably leading the Partnership through the complex transition period. We were fortunate to be able to benefit from her extensive experience in disease prevention and control in global health, as well as her diplomatic skills and vast networks which were instrumental in putting the revitalized Partnership back on the map,” he added.

Dr Diallo also welcomed the incoming Board Chair Professor Maha Taysir Barakat, who has served as a Partnership Board Member since 2016 and Executive Chair Elect from January-April 2019, and expressed the Secretariat’s full support to her in her new role.

Professor Barakat said: “I am honoured and delighted to commence my term as Board Chair of the RBM Partnership at a time when we must step up our collective commitment and investment in the global fight against malaria. I am extremely grateful to the RBM Partnership Board for the confidence and trust placed in me, and look forward to continuing to work with my fellow Board members, the Secretariat and the Partners on this tremendously important cause.”

As part of her role within the Health Authority Abu Dhabi, Professor Barakat has supported several public health eradication campaigns against communicable diseases both within the UAE and internationally, including Africa and the Indian subcontinent.

In addition to the changes in the Board leadership, two RBM Partnership Board Members have completed their terms and stepped down from the Board: Professor Awa Marie Coll-Seck, former Minister of Health and Social Welfare of Senegal, and Mr Paulo Gomes, former Executive Director, World Bank. The RBM Board thanked them for their dedicated service to the Partnership. 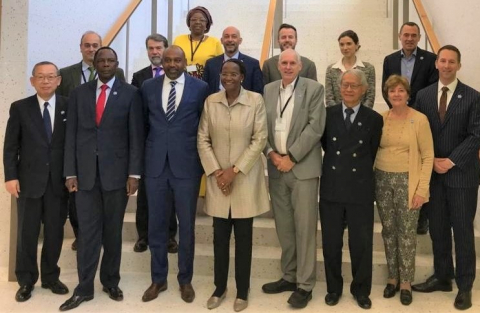