The RBM Partnership to End Malaria welcomes the announcement that Algeria and Argentina have been certified malaria-free by the World Health Organization (WHO).  Algeria will become the third African nation to reach this goal[1], while Argentina is the second country to be certified in the last 45 years (after Paraguay) and the ninth country to be certified in the Americas region since 1962.

Algeria’s and Argentina’s achievements bring the number of countries certified malaria-free in the last four years to six, with Maldives achieving elimination in 2015, Sri Lanka in 2016, and Uzbekistan and Paraguay in 2018. These countries continue to prove that with persistent country leadership and dedicated resources, malaria elimination is possible.

This announcement, made by WHO Director-General Tedros Adhanom Ghebreyesus at an RBM Partnership co-organised event at the World Health Assembly in Geneva, comes after decades of battling the disease and its effects. In the last decade, Algeria’s and Argentina’s leaders followed through with dedicated country-led efforts. Critical to their success was providing universal healthcare to increase diagnosis and treatment of malaria to all; effective cross-border collaboration to reduce transmission and rapidly respond to outbreaks; and, strong surveillance systems to ensure that every last case of malaria was rapidly identified and treated.

Today, more countries than ever before are close to malaria elimination. Among those approaching this critically important public health and sustainable development goal are China and El Salvador, both of whom had zero cases of malaria recorded for the first time in 2017. In the 2018 World Malaria Report, 46 countries also reported fewer than 10,000 cases of malaria. Meanwhile, WHO expects that at least 10 countries that had endemic malaria in 2015 will achieve at least one year of zero malaria cases by 2020, as outlined in the Global Technical Strategy for Malaria 2016-2030[2].

“The news that Algeria and Argentina have been declared malaria free is a remarkable achievement for both countries. As well as saving precious lives and strengthening health systems, malaria-free status provides external economic benefits for these countries enabling them to free up resources to address other health and development priorities and improve worker productivity and school attendance.

“Other countries now have two more nations that serve as examples of how elimination can be achieved. Critical to that success is ensuring that no one is left behind in getting the services they need to detect, treat and cure malaria. At a time when malaria cases are rising in the highest burden countries for the first time in more than a decade, celebrating and learning lessons from these victories is critical.

“The RBM Partnership to End Malaria applauds Algeria and Argentina for their ongoing commitment of human and capital resources to benefit their citizens and the global efforts as we move two steps closer to a malaria free world.”

“Following Paraguay’s malaria-free certification last year – the first in the Americas for 46 years – Argentina’s achievement of malaria-free status signifies increased momentum to end malaria in Latin America, while setting a fine example to follow for the remaining malaria-endemic countries in the region.

In the case of Argentina, the country has taken a targeted approach to great success, focusing efforts in the Northern Region, their historic endemic area. Cross-border collaboration with Bolivia was therefore a key factor to Argentina’s achievement suggesting that other neighbouring countries in the region consider collaborating on cross-border initiatives to control the disease. Now, with some countries in Latin America recording a resurgence in malaria cases, a robust surveillance system and the continuous retraining of health workers which enabled Argentina to maintain zero malaria cases must continue to be prioritised in the long-term.”

“Malaria-free certification signifies a monumental achievement for Algeria. With 90% of global malaria cases contracted in Africa, achieving zero malaria cases for several consecutive years demonstrates the power of strong political will and effective monitoring strategies, which we hope to see expand across Africa.

“Support from the Global Fund to Fight AIDS, Tuberculosis and Malaria, the leading international source of malaria funding accounting for almost 60% of international funds available to target the disease, was also instrumental in providing in-country assistance to Algeria. Accounting for almost 60% of funds available to target the disease, Algeria’s success therefore demonstrates the significance of attaining the Global Fund’s $14 billion funding target ahead of its Sixth Replenishment later this year.”

To arrange an interview or find out more about malaria elimination in Algeria and Argentina,  please contact the RBM Partnership press office at Grayling on RBMPartnership@grayling.com or call +44 (0) 20 3861 3747.

The Global Fund: The Global Fund is the leading source of international funds for malaria, accounting for almost 60% of funds available to target the disease and 44% of all resources for malaria prevention and treatment. The Global Fund seeks to raise at least US$14 billion to step up the fight against AIDS, Tuberculosis and Malaria at its Sixth Replenishment Conference this October. A fully funded Global Fund is expected to help save 16 million lives, reduce mortality rates for these three diseases by half and prevent 234 million new infections by 2023.

[1] Morocco was certified in 2010 and before that, Mauritius was the only African country to be certified (1973). 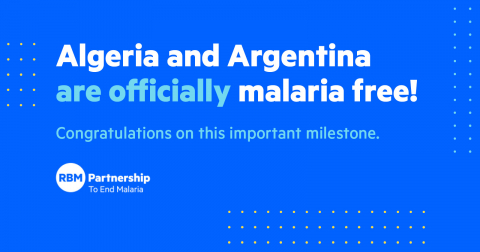 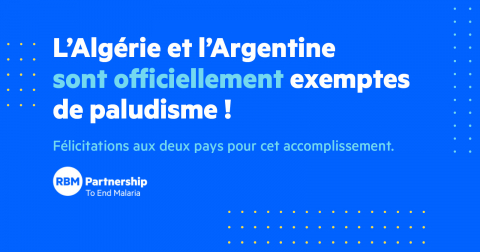