The RBM Partnership to End Malaria held its first Annual Partners’ meeting on 20 May 2018 in Geneva, Switzerland at the Movenpick hotel. The occasion gathered partners and stakeholders before the commencement of the 71stWorld Health Assembly (WHA) in order to brief them on the status of malaria around the world, key innovations and developments, and provide an update from the RBM Partnership.

Before introducing the speakers, Dr Winnie Mpanju-Shumbusho, Chair of the RBM Partnership Board, provided an update on the RBM Partnership, noting the transformation that the RBM Partnership underwent after the external evaluation of 2013 in order to meet the 2030 malaria targets and the UN Sustainable Development Goals (SDGs). Dr Mpanju-Shumbusho also mentioned the new governance structure and three Partner Committees which embody the core partnership functions, including Advocacy and Resource Mobilisation, Country and Regional Support, and Strategic Communications, as well as the affiliated Working Groups (including the newly accredited Multi-Sectoral Working Group), and the rebranding of the Partnership.

Dr Mpanju-Shumbusho recognised the efforts of the RBM Partners that contributed to saving nearly 7 million lives by cutting malaria deaths significantly. Dr Mpanju-Shubmusho mentioned that the fight against malaria is currently at a crossroads, and that without a renewed movement to mobilise political will and resources the hard-won gains against the disease may be lost. Dr Mpanju-Shumbusho went on to mention the high-level commitments and pledges made at the Malaria Summit in London during the month of April that will reignite progress towards ending malaria.

The Zambian Minister of Health stressed the importance of malaria elimination to the country’s economic development and highlighted the continued efforts to prevent, control, and eliminate the disease that is prevalent with differing intensities throughout the country – noting “Our people won’t be wealthy unless they are healthy”. He went on to mention the prerequisites for successfully meeting the country’s ambitious goal to eliminate malaria by 2021: scaling up an integrated vector control programme with universal access to IRS; using the correct combination of interventions and recruiting local health agents as part of a people-centred approach; and increasing community mobilisation.

The keynote address was followed by a panel discussion moderated by Dr Soumya Swaminathan, Deputy Director General for Programmes, World Health Organization (WHO). Echoing Dr Chitalu Chilufya’s point, Dr Soumya stressed that by eliminating malaria, we are investing in our human capital. The panelists engaged in a discussion focusing on global innovations in the fight against malaria.

Dr Pedro Alonso, Director of WHO Global Malaria Programme, briefed participants on the 2017 World Malaria Report and the increase in malaria incidence after an unprecedented period of success in global malaria control over the past decade. Dr Alonso stressed that malaria is now at a crossroads and, with a plateau in funding and major funding gaps, progress can be easily reversed. Notwithstanding, Dr Alonso recognised the success of countries around the world, with specific mention of countries that are expected to be certified as malaria free in the near future.

Mr Lelio Marmora, Executive Director, Unitaid, continued the discussion by exploring Unitaid’s investments in malaria and the impact of innovations in the fight against the disease. With a portfolio of US$ 300 million, Unitaid is investing in innovations in all areas including prevention and case management, as well as in crosscutting innovations. Specific mentions were made to Next Generation Indoor Residual Spray (NgenIRS)​, TIPTOP: Transforming IPT for Optimal Pregnancy, CARAMAL: Rectal artesunate for severe malaria, ACCESS-SMC. The impact of these grants, respectively, is that they will improve affordability of new insecticides for resistance, catalyse uptake of IPTp and improve referral to antenatal care, as well as bending the curve of malaria mortality by saving many more lives.

Dr Elizabeth Chizema, Director at National Malaria Control Programme, Ministry of Health, Zambia discussed the importance of tailored and targeted investments in malaria. Dr Chizema stressed the heterogeneous nature of malaria, even within one country, and how targeted investments focusing on specific interventions can further our fight against malaria, and the importance of combining different interventions in an adapted manner.

Ms Joy Phumaphi, Executive Secretary, African Leaders Malaria Alliance (ALMA), continued the discussion with an overview of Accountability and Action Scorecard management tools.
Ms Phumaphi spoke of the success of the ALMA Scorecard, developed in 2011 after request from ALMA Heads of State, and how it has enhanced tracking and accountability for malaria and reproductive, maternal, newborn and child health (RMNCH). Following this success, ALMA has supported the development of country malaria scorecards and action trackers. Ms Phumaphi also touched on the importance of innovation and mentioned the functionality of country scorecards allowing higher level engagement via the new SMS functionality workplan tracking feature and the decentralisation of scorecards to the community level. Ms Phumpahi also mentioned that ALMA is working to roll out End Malaria Councils in countries, engaging both government and external actors.

Dr David Reddy, Chief Executive Officer, Medicines for Malaria Venture (MMV), was the next panelist to take the stage with a discourse on new malaria drugs and development. Dr Reddy displayed the increase of anti-malaria drug resistance over the years and the stalling progress in the reduction of malaria mortality in Africa since 2016, therefore recalling the need for MMV’s strong R&D portfolio of innovative antimalarial drugs that address current unmet medical needs and emerging drug resistance, and increase the operational feasibility of malaria elimination programs.

Mr Mathias Mondy, Business Development Manager, Innovation Vector Control Consortium (IVCC), added to the discussion on the role of vector control in the fight against malaria mainly through ITN distribution and IRS treatment campaigns. Mr Mondy demonstrated that the vector control community is moving away from ‘business as usual’ through groundbreaking initiatives best exemplified by ZeroX40, whereby five chemical companies have joined forces to develop innovative vector control solutions. Mr Mondy concluded by suggesting four recommendations for malaria elimination: a complete toolbox to prevent resistance and provide adapted solutions; a clear pathway from the development stage to market uptake of new products and tools in order to incentivise innovation; an access strategy for resource-poor countries to allow to-scale interventions; and, lastly, a commitment from funders and innovators to stay the course.

Dr Swaminathan wrapped up the panel discussion up by thanking the panelists and invited questions from the audience, which focused, inter alia, on Zambia’s lessons learnt, fever management, resource mobilization, and  the importance of communities and infrastructure in the fight against malaria.

Dr Kenneth Staley, Global Malaria Coordinator, United States President’s Malaria Initiative (PMI) started off by introducing himself as the new US Global Malaria Coordinator, having assumed the position less than a month before. Dr Staley spoke about the sources of malaria funding being majorly bilateral, with other funding being sources from partners such as the Global Fund. Dr Staley stressed that data-driven decision making should be used to drive efficiencies with comparative advantage. Dr Staley also addressed that the outlook should be unique as per the country context when thinking of how to move forward. Dr Staley expressed that this move should involve a layered approach, coordination between vector control, IRS, etc. and, finally, the scaling up of tools. 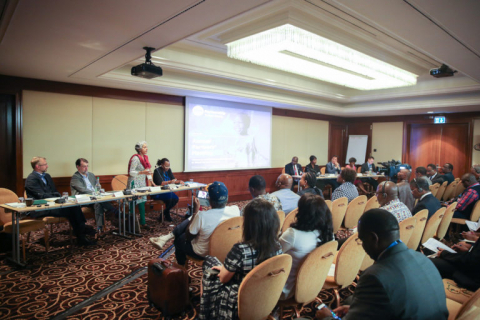 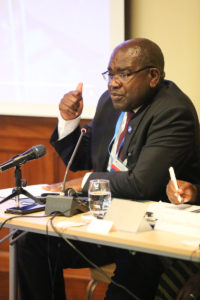 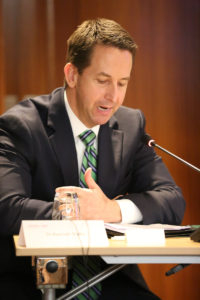