Malaria stands in the way of the global ambitions driving all the Sustainable Development Goals (SDGs)—this was the main message of the RBM Partnership to End Malaria at this year’s United Nations General Assembly in New York.

The RBM Partnership used the 74th session of the United Nations General Assembly to advocate how malaria elimination can help advance the achievement of Universal Health Coverage (UHC) and broader SDGs.

At the high-level meeting on Universal Health Coverage: Moving Together to Build a Healthier World held on 23 September, Professor Maha Taysir Barakat, Board Chair of the RBM Partnership, conveyed how efforts to reach UHC and the fight against malaria can be mutually reinforcing. More specifically, malaria interventions can advance UHC by:

In addition, Dr Abdourahmane Diallo, CEO of the RBM Partnership to End Malaria, participated in the Access Challenge’s high-level conference entitled Achieving UHC: A Sustainable Future for Africa. Dr Diallo discussed how malaria elimination is at the heart of all SDGs – including ending poverty, improving health and well-being and ensuring quality education.

To date, global efforts to end malaria have allowed countries to improve their health systems and advance UHC by providing equitable and financially accessible health services to the most vulnerable populations.

Increased investments in both UHC and malaria are critical to maintain progress and address the burden of the disease in sub-Saharan Africa, where malaria cases increased by 3.5 million in 2017. With more countries closer to malaria elimination than ever before, further investment in UHC will enable more countries to defeat this disease, and for the world to reach the SDGs.

“Achieving a world free of malaria will be accelerated by the successful adoption of UHC. In 2016 alone, the out-of-pocket costs incurred by those seeking care for malaria amounted to $556 million. This is a vast sum, one that greatly exacerbates the cycle of poverty and means that almost 1 billion people do not receive the health care they need. Since 2000, global efforts to control and eliminate the disease have saved 7 million lives and prevented 1 billion cases of malaria, and we must continue the drive to UHC to ensure that even more lives are protected.”

“Malaria is a disease of poverty and is mostly concentrated in the poorest countries in the world. Malaria deaths are most prevalent in vulnerable populations – people without access to health care, people suffering from malnutrition and people vulnerable to environmental shocks. By driving malaria elimination across the globe, we will be able to advance the sustainable development goals and protect more people from this deadly disease. With the Global Fund Replenishment taking place in just a few days from now, there has never been a more urgent time to step up the fight against malaria and raise awareness of this terrible disease.”

In recognition of the disproportionate impact of malaria on pregnant women, mothers and young children, the RBM Partnership, together with the International Federation of the Red Cross and Red Crescent Societies (IFRC) and UNICEF, convened partners and country leaders at a side-event to highlight the importance of women’s leadership in the fight against malaria and develop a plan of action to advance maternal and child health SDGs through a multi-sector approach.

This year saw unprecedented global mobilization on the topic of climate change, culminating at the UN Climate Action Summit on 23 September. Climate change and malaria are two defining challenges of our generation. Both affect disproportionately the poorest and the most vulnerable, especially in Africa, and may further jeopardize human wellbeing in the future.

Malaria is a particularly climate-sensitive disease, and even the slightest warming may heighten malaria risk. In addition, climate change impacts, especially extreme weather events, are already putting an added pressure on already stretched resources of malaria-affected countries. The RBM Partnership is calling for greater dialogue between public health and environment professionals to tackle these interlinked challenges. 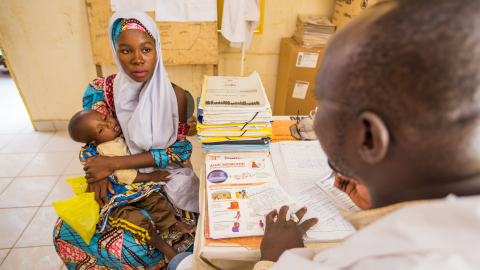