Paris to serve as host city for World Malaria Day 2019

Geneva – Paris, 25 February 2019 Today the RBM Partnership to End Malaria announced that Paris, France, will be the official host city of World Malaria Day 2019 on 25th April. In partnership with the city of Paris and the French Government, a series of events will be organised across the city centre, recognising the importance of Francophone contributions to the fight against malaria, and the need to step up the fight to accelerate progress against the preventable and treatable disease.

The theme for World Malaria Day 2019 - ‘Zero Malaria Starts with Me’ – will empower individuals across the world to make a personal commitment to saving millions more lives, and help communities and economies to thrive by ending malaria. Decades of significant progress against the disease have slowed as cases of malaria increased in 2016 and 2017, after more than a decade of steep decline. This global movement seeks to re-energise the fight to eliminate the disease, which still threatens half of the global population and kills one child every two minutes.

World Malaria Day presents an opportunity to engage global leaders, civil society, the private sector, academic institutions and the general public in countries around the world. In addition to events taking place in Paris, the RBM Partnership and the French government are planning events in Francophone countries, where 313 million people are at risk of malaria. Indeed, half of the 10 highest malaria burdened countries are Francophone countries.

In addition, the Partnership’s member organisations will host complementary events in other countries all over the world to re-ignite a global movement determined to end malaria. These will be held in countries with a high burden of malaria, as well as in major donor countries including the UK, the United States and across Asia. This April also marks the first anniversary of the commitment made by Commonwealth leaders, following the 2018 Malaria Summit London, to halve the number of malaria cases and deaths in Commonwealth countries over five years.

Dr Winnie Mpanju-Shumbusho, Board Chair, RBM Partnership to End Malaria, explains:
“World Malaria Day offers people all over the world the opportunity to step up the fight against malaria at a time when global malaria cases are on the rise and funding has flatlined. We cannot accept this as status quo, rather each one of us must commit to ensuring universal access to life-saving interventions for the hundreds of millions of people around the world still at risk of malaria. By taking global action, we will protect the significant gains made against malaria and extend them to the most vulnerable communities, primarily women and children. We must also continue to celebrate our successes to-date, and support countries and partners’ efforts to end this deadly disease within our lifetimes. In this respect, we extend our gratitude to France and the city of Paris for their support with the organisation of these important events for World Malaria Day.”

2019 will be a crucial year for donor and malaria-affected countries and the private sector to increase their commitments to the fight against malaria, as France will also host the Global Fund's Sixth Replenishment Conference in Lyon on 10th October 2019. The meeting’s objective - to secure commitments of more than US$14 billion in funding and to mobilise partners – will be essential to saving an additional 16 million lives and preventing 234 million new infections, which will help end the epidemics of AIDS, tuberculosis and malaria by 2030, as outlined by the UN’s Sustainable Development Goals. The Global Fund has launched the #stepupthefight campaign to ensure the replenishment target is met. A fully funded Global Fund is critical to advancing progress against malaria as currently it provides more than half of all funding for global malaria programmes, however a global malaria funding gap remains.

Professor Agnès Buzyn, French Minister for Solidarity and Health, said:
“Now is the time to reignite the fight against malaria, as progress is stalling. In 2017, for the first time in ten years, the number of malaria cases increased again, affecting 219 million people. The African continent accounts for over 90% of this burden and seven West and Central African countries are among the most affected. We must give ourselves the means of fighting this preventable and treatable disease, that kills one child every two minutes. On the 25th April, France will reassert its full commitment to the fight against malaria, through multilateral financing, as well as through our government agencies, civil society and our research institutes. This year, we will provide a specific political and technical support, to African countries that are committed to increase their investment in health through l’Initiative Présidentielle pour la Santé en Afrique [the Presidential Initiative for Health in Africa]. Less than eight months ahead of the Sixth Replenishment Conference of the Global Fund to Fights AIDS, Tuberculosis and Malaria in Lyon, France calls on African countries to strengthen their commitments for health, and calls both private and public sector partners to strengthen their engagements to the Global Fund to raise at least $14 billion required to end this pandemic by 2030”.

Anne Hidalgo, Mayor of Paris, said:
"The city of Paris is proud to host this year's World Malaria Day. With more than 6 million euros spent each year, Paris is one of the principal local authority contributors to international aid, particularly in the areas of health, combatting pandemics and sanitation. I hope that this day will enable us to raise awareness of the importance of this commitment among Parisians, as it fully reflects the solidarity of Paris. It constitutes a first step in view to build a productive cooperation with francophone cities, members of the International Association of Francophone Mayors, which I have the honour to chair."

Malaria is one of the world’s oldest and deadliest diseases. Since its establishment, the RBM Partnership to End Malaria and the Global Fund have played critical roles in global progress against malaria, contributing to a 60% reduction in deaths due to malaria, an estimated 7 million lives saved and 1 billion cases prevented.

Peter Sands, Executive Director for the Global Fund to Fight AIDS, Tuberculosis and Malaria adds:
“The human toll due to malaria is unacceptable. Together with our partners and France’s leadership, we must raise our game to accelerate innovation, step up our efforts to get back on track to end the epidemics and protect millions of families.”

In the months leading up to World Malaria Day, advocates can show their support on social media using #WorldMalariaDay, #ZeroMalariaStartswithMe, #ZeroPalu and #StepUptheFight.

“Globally, the world has made incredible progress against malaria. But we are still too far from the end point we seek: a world free of malaria. Every year, the global tally of new malaria cases exceeds 200 million. And every 2 minutes, a child dies from this preventable and treatable disease. The damage inflicted extends far beyond loss of life: malaria takes a heavy toll on health systems, sapping productivity and eroding economic growth. Ultimately, investing in universal health care is the best way to ensure that all communities have access to the services they need to beat malaria. Individual and community empowerment through grassroots initiatives like Zero malaria starts with me can also play a critical role in driving progress.”

Notes to editors
To arrange an interview or find out more about the launch of the upcoming campaign please contact the RBM Partnership press office at Grayling on RBMPartnership@grayling.com or call +44 (0) 20 3861 3747.

About the RBM Partnership to End Malaria
The RBM Partnership to End Malaria is the largest global platform for coordinated action against malaria. Originally established as Roll Back Malaria (RBM) Partnership in 1998, it mobilises for action and resources and forges consensus among partners. The Partnership is comprised of more than 500 partners, including malaria endemic countries, their bilateral and multilateral development partners, the private sector, nongovernmental and community-based organisations, foundations, and research and academic institutions. www.endmalaria.org 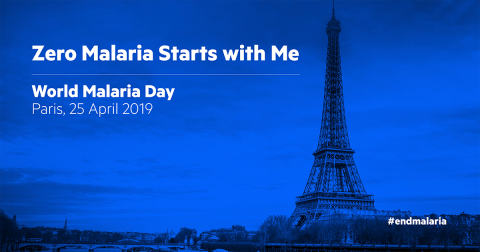