2 July 2020, Addis Ababa/Geneva – Today marks the 2nd anniversary of Zero Malaria Starts with Me, the pan-African movement to strengthen national, regional and continental efforts towards a malaria-free Africa.

Co-led by the African Union Commission and the RBM Partnership to End Malaria, Zero Malaria Starts with Me sparks grassroots movements by engaging political leaders at all levels, mobilising resources and funding, and empowering communities to take ownership of malaria efforts and hold leaders accountable in the fight against malaria.

“Now counting 15 countries, Zero Malaria Starts with Me is going from strength to strength across the continent. Yet, as COVID-19 threatens efforts to end malaria, it is more important than ever that Africa is united to end this disease. We therefore call on the rest of continent to join the movement to accelerate progress towards zero malaria.

“In Africa, malaria affects all groups of society, hindering our children’s education, burdening our health systems and impacting economic development. It is therefore crucial that everyone – from country and community leaders, to businesses and communities – remains vigilant to protect the hard-won gains we have made against the disease and advance progress. Zero malaria starts with me, with you, and with all of us.”

Malaria is a disease which disproportionately affects the African continent, with over 90% of malaria cases and deaths worldwide. According to World Health Organization (WHO) modelling data, severe disruptions to insecticide-treated net campaigns and in access to antimalarial medicines as a result of COVID-19 could lead to a doubling in the number of malaria deaths—to nearly 800,000—in sub-Saharan Africa this year.

To avert this dire scenario, African nations are mobilising to use the critical window of opportunity ahead of the rainy season and before the further spread of COVID-19 across the continent to move ahead with life-saving mosquito net distribution campaigns, indoor residual spraying, and preventive treatments for pregnant women and children.

“The Zero Malaria Starts with Me movement is continuing to gain momentum and we are proud of what it has achieved so far, but we must now step up our efforts even more to ensure that malaria—one of our oldest and deadliest enemies—does not resurge as a result of COVID-19.

“As we move into the initiative’s third year, it is encouraging that the private sector is taking an increasingly prominent role in efforts to end the disease. We look forward to building on our efforts with the African Union Commission, countries, businesses and communities to implement tailored zero malaria programmes and realise our vision of a malaria-free Africa.”

Building on its success, today the movement launched the Zero Malaria Business Leadership Initiative. Led by pan-African commercial bank Ecobank, the RBM Partnership and advocacy-tank Speak Up Africa, the collaboration seeks to boost engagement from Africa’s private sector in the fight against malaria. It provides the opportunity for businesses to protect their local communities from malaria and support local economic growth by advocating for stronger political will, increased funding, and more targeted malaria elimination responses.

“Intensifying collaboration to end malaria on the continent is an imperative as the disease continues to affect our economies. Because African SMEs are the backbone of our economies in sub-Saharan Africa, working with Speak Up Africa will ensure that we involve and empower them, as well as other private sector actors in contributing to increased awareness around malaria in our communities.”

Since its launch, the Zero Malaria Starts with Me campaign has increased national leadership and community engagement in the fight against malaria. Key achievements include the establishment of Zambia’s End Malaria Council and the launch of a media coalition supporting journalists to report on malaria in Sierra Leone. Notably, His Majesty King Mswati III of the Kingdom of Eswatini, launched a new End Malaria Fund to facilitate domestic financing and close the US$ 5 million funding gap required to achieve ambitious malaria targets in Eswatini.

“We commend the high-level African leadership and commitment to defeat malaria since the 2000 Abuja Declaration. At the centre of Zero Malaria Starts with Me campaign is the involvement of all stakeholders and emphasis on local action and domestic investments. The establishment of national End Malaria Councils and Funds is a gamechanger that is bringing together all parts of society to mobilise resources in support of malaria elimination. It is only through country-owned and country-led efforts that we will be able to reach the zero malaria vision across the African continent.”

To arrange an interview or find out more about Zero Malaria Starts with Me, please contact the RBM Partnership Press Office at Grayling on RBMPartnership@grayling.com or call +44 (0)20 3861 3747.

About the African Union

The African Union (AU) is a continental body consisting of the 55 Member States that make up the countries of the African Continent. It was officially launched in 2002 as a successor to the Organisation of African Unity (OAU, 1963-1999). The Department of Social Affairs (DSA) works to promote the AU’s health, labour, employment, migration, social development, drug control, crime prevention, sport, and cultural agenda. To ensure the realisation of its objectives and the attainment of the Pan African Vision of an integrated, prosperous, and peaceful Africa, Agenda 2063 was developed as a strategic framework for Africa’s long term socio-economic and integrative transformation. Agenda 2063 calls for greater collaboration and support for African led initiatives to ensure the achievement of the aspirations of African people.

The RBM Partnership to End Malaria is the largest global platform for coordinated action against malaria. Originally established as Roll Back Malaria (RBM) Partnership in 1998, it mobilises for action and resources and forges consensus among partners. The Partnership is comprised of more than 500 partners, including malaria endemic countries, their bilateral and multilateral development partners, the private sector, nongovernmental and community-based organisations, foundations, and research and academic institutions. The RBM Partnership Secretariat is hosted by the United Nations Office for Project Services (UNOPS) in Geneva, Switzerland. 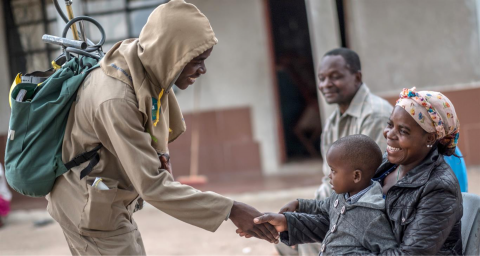