As patients, caregivers and providers, women and adolescent girls in malaria-endemic countries are leading investors in the malaria fight, yet systemic gender inequalities also cause them to bear the societal, health and economic burdens of the disease

Geneva/Seattle, June 29, 2021 — The fight against malaria can no longer be gender blind, contends a new report, “Achieving a Double Dividend: The Case for Investing in a Gendered Approach to the Fight Against Malaria,” launched on the eve of the Generation Equality Forum.

The report, co-authored by Malaria No More and the RBM Partnership to End Malaria, makes the case for bringing an intentional gender lens to malaria programs, policies, leadership, and research and data. It lays out potential impacts that ending malaria sooner can have on advancing gender equality and how greater focus on investing in women and adolescent girls can help accelerate progress against malaria, a preventable and treatable disease that infects 1/3 of pregnant women in Africa and still kills a child every two minutes.

Her Excellency Ellen Johnson Sirleaf, former President of Liberia, Nobel Laureate and co-chair of the End Malaria Council, authored the foreword of the Investment Case stating: “When we recognize and invest more in women and adolescent girls at the fulcrum of the malaria fight, the impacts will be transformative and far-reaching for both health and gender equality outcomes. And when women and adolescent girls are empowered and gender equality improves, a further virtuous cycle is spurred with greater access to health care leading to lower child mortality rates and the end of malaria sooner.”

As patients, caregivers, and healthcare providers, women and adolescent girls disproportionately experience the health, societal, and economic brunt of malaria. Much of the toll is hidden due to factors that include lack of disaggregated gender and age data to assess the impact of gender barriers to accessing life-saving malaria prevention and treatment within 24 hours of fever onset; the overwhelming percentage of female Community Health Workers (CHWs) most of whom work as unpaid volunteers; and the time spent on caregiving for family members with malaria, which recurs multiple times a year and over a lifetime. These effects often have lifelong consequences and perpetuate malaria as a leading contributor to poverty and gender inequality.

“Through their unpaid labor, women community health workers effectively serve as one of the biggest ‘donors’ to the global malaria campaign. Yet, mothers and adolescent girls also bear the overwhelming brunt of the health and economic burden malaria places on poor families. Malaria eradication would be transformative for the health and economic empowerment of women across the malaria-affected world,” remarked Martin Edlund, CEO of Malaria No More. “Countries can realize significant health, societal, and economic benefits from valuing and investing in women and growing the Community Health Workforce that has proved vital to malaria detection, treatment, and surveillance in the poorest and remote communities. These are the same capacities needed to defeat COVID-19 and prevent the next pandemic.”

A recent initial analysis of peer-reviewed literature by researchers from the Swiss Tropical Health Institute and Columbia University estimates the hidden opportunity costs of malaria’s impact. It found that women spent four times the number of days compared to men doing unpaid childcare due to malaria cases in the household. And women CHWs spend four times as many hours on unpaid work compared to men.

“Defeating malaria within a generation is possible, but only if we accelerate progress against it. To do this, we need to unlock the power, agency, and leadership of women and adolescent girls,” said Professor Maha Taysir Barakat, Board Chair of the RBM Partnership to End Malaria. “Women’s and adolescent girls’ empowerment boosts productivity, increases economic diversification and income equality in addition to other positive development outcomes. More needs to be done to ensure that families, communities, and countries value the benefits that can be realized when women and adolescent girls are fully valued and their full participation in society is welcomed.”

The global community has not consistently brought a gender lens to the fight against malaria-- until now. Today, a growing movement is calling for an intentional, cohesive, and sustained approach to gender and malaria. The Investment Case calls on governments, donors, researchers, implementers, policy makers, civil society organizations, and the private sector to take action in four areas:

The launch of the Investment Case comes a day before the start of the Generation Equality Forum led by UN Women and co-hosted by the Governments of France and Mexico. Scheduled to be the largest global feminist gathering since 1995, the aim of the Forum is to bring together all stakeholders committed to gender equality to review progress and make concrete, specific, and ambitious commitments to accelerate progress towards gender equality in the next five years.

More than 100 gender equality and malaria experts worldwide were consulted to inform this investment case. The report and its recommendations are informed by desk research, expert interviews, thematic workshops, and a policy forum that explored the health, human rights and economic imperatives of bringing a gender lens to the malaria fight.

About Malaria No More

Malaria No More envisions a world where no one dies from a mosquito bite. More than a decade into our mission, our work has contributed to historic progress toward this goal. Now, we’re mobilizing the political commitment, funding, and innovation required to achieve what would be one of the greatest humanitarian accomplishments – ending malaria within our generation. For more information, visit www.malarianomore.org.

About The RBM Partnership To End Malaria 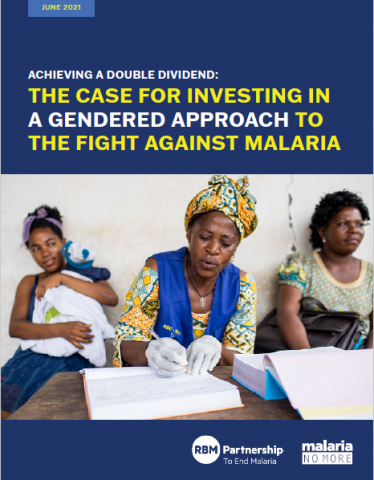