New Lancet study builds evidence base for new class of insecticide treated nets, underlining importance of R&D and targeting the scale up of new tools to accelerate action against malaria

Geneva, 25 March 2022 – Today, one month ahead of World Malaria Day, results from a new study published in The Lancet show the potential for a new class of insecticide-treated nets to combat growing insecticide resistance. The findings highlight the importance of ongoing investments in developing, scaling up and targeting the use of current and new interventions to save more lives and accelerate the fight against malaria.

Since 2000, global partnership has halved malaria death rates and saved 10.6 million lives, yet half the world is still at risk from the disease. However, growing insecticide resistance has contributed to a levelling off of progress in high burden countries over the last five years. More recently, the pandemic’s disruptions to malaria prevention and treatment have contributed to a 12% increase in malaria deaths over 2019. The World Malaria Report 2021 also shows malaria deaths in Africa are significantly higher than previous estimates, with children under five accounting for 80% of malaria deaths in the region.

To address these challenges, on World Malaria Day, 25 April, the RBM Partnership to End Malaria and wider global health community will call on countries to meet the Global Fund’s Seventh Replenishment target of at least USD$18 billion to fund malaria, HIV and TB programs from 2024-2026. H.E. President Uhuru Kenyatta of Kenya and the African Leaders’ Malaria Alliance (ALMA) will co-host an event to engage donor and malaria-endemic country leaders on this issue, corresponding to a partners event hosted in the U.S, which will host the Global Fund Replenishment conference later this year.

The World Malaria Day 2022 theme, ‘Advance Equity. Build Resilience. End Malaria.’  will raise awareness of the urgent need for action and targeted scale up of existing and new tools, such as new nets and the RTS,S vaccine, as well as data-led strategies and increased investment in the research and development of transformative tools in the pipeline. These approaches will help countries rapidly drive down malaria cases and deaths and save millions more lives from the preventable disease that kills a child every minute.

“Global efforts and strategic investments have set the stage for countries to dramatically reduce malaria cases and deaths to meet the global goal of ending malaria by 2030. But reaching zero will require the global community to fight malaria differently – particularly in countries with a high burden of malaria. World Malaria Day is a reminder to the global health community that now is the time to fight for what counts and seize the opportunity to deliver a more equitable, malaria-free world.”

The Global Fund finances 56% of global malaria programs and, if fully resourced, the Global Fund estimates it will save 20 million lives from the three diseases, while reinforcing systems for health and pandemic preparedness. Estimates also show that Global Fund programs could reduce malaria cases by two-thirds and malaria deaths by 62% and eliminate malaria in at least six countries by 2026.

“Over the last two years, long-term investments to end malaria have proven critical in mitigating the impact of COVID-19 and strengthening health systems that serve as a pathway for countries’ capacity for future pandemic preparedness. Growing challenges also highlight the role of ongoing investments in researching, developing and accelerating the targeted scale up of current and transformative interventions to reach everyone at risk of malaria with life-saving tools.”

To mark progress and commitments made in the global fight to end malaria and call for action, countries and partners will come together this World Malaria Day with events around the globe, including:

The study (Effectiveness and cost-effectiveness against malaria of three types of dual-active-ingredient long-lasting insecticidal nets (LLINs) compared with pyrethroid-only LLINs in Tanzania: a four-arm, cluster-randomised trial), which followed over 4,500 children aged 6 months to 14 years in Tanzania over 24 months, measured the effectiveness of long-lasting insecticidal net treated with two insecticides, chlorfenapyr and pyrethroid (chlorfenapyr LLIN) compared to the standard pyrethroid only long-lasting insecticidal net (LLIN). It was conducted by a team of researchers in the UK, Tanzania and Canada. Findings from this study and another currently underway in Benin will provide important evidence for the World Health Organization and malaria control programmes to assess whether these new nets should be deployed in areas of insecticide resistance when standard bed nets have failed.

For more information about the study, visit the London School of Hygiene & Tropical Medicine (LSHTM) website.

World Malaria Day is observed on 25 April each year to raise awareness of the global burden of malaria, a preventable and treatable disease. Led by the global malaria community and the RBM Partnership to End Malaria, World Malaria Day educates citizens in malaria affected countries on simple actions they can take to prevent malaria, highlights the impact of investments in ending malaria, and engages community, national and global leaders to ensure ending malaria remains a priority on the global agenda. People around the world can join the conversation on social media by using the following hashtags: #WorldMalariaDay, #FightForWhatCounts and #ZeroMalariaStartsWithMe.

The RBM Partnership to End Malaria is the largest global platform for coordinated action against malaria. Originally established as Roll Back Malaria (RBM) Partnership in 1998, it mobilises for actand resources and forges consensus among partners. The Partnership is comprised of more than 500 partners, including malaria endemic countries, their bilateral and multilateral development partners, the private sector, nongovernmental and community-based organisations, foundations, and research and academic institutions. endmalaria.org 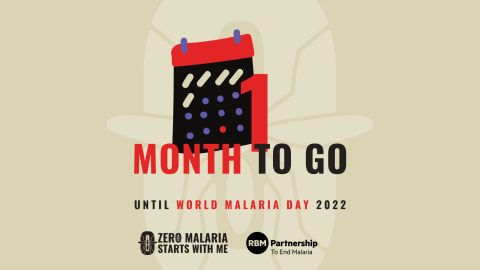