Geneva, 26 April 2021 – From country and business leaders to sports and cultural stars, new champions across the African continent and beyond joined the Zero Malaria Starts with Me movement this World Malaria Day, the global awareness day observed on 25 April.

The theme of this year’s World Malaria Day, ‘Zero Malaria – Draw the Line Against Malaria’ celebrates the progress achieved by a diverse set of countries that have reached zero malaria since 2000 and encourages all nations to accelerate efforts towards achieving a malaria-free world.

In his message, United Nations Secretary-General António Guterres declared: “Despite the COVID-19 pandemic and the multiple crises it has caused, a growing number of countries are approaching and achieving malaria elimination. Today, on World Malaria Day, we commend all countries that have reached the ambitious target of zero malaria.  Together, they are showing the world that a malaria-free future is possible.”

Dr Abdourahmane Diallo, CEO of the RBM Partnership to End Malaria, added: “We all have our part to play in the fight against malaria, and this World Malaria Day we recognize the incredible progress made to date. Our zero malaria goal is within reach but it will take greater commitment, investment and innovation to get there. The latest pandemic has shown us how much we can achieve when working together, and why continued malaria investment is critical. Ending malaria is the pathway to strengthening health systems, supercharging economies and beating pandemics like COVID-19.”

To mark World Malaria Day, several countries including Cameroon, the Democratic Republic of Congo and Zimbabwe launched initiatives in support of the pan-African ‘Zero Malaria Starts with Me’ movement, which mobilizes and empowers communities to take ownership over the fight to end malaria.

Burkina Faso commemorated this year’s World Malaria Day under the theme of ‘Zero Malaria Starts with Me’ at an official event led by His Excellency Roch Marc Christian Kabore, the President of Burkina Faso. The country will also launch its Zero Malaria Business Leadership Initiative, which seeks to mobilize the private sector in the fight against malaria. Ghana also announced it will join the Zero Malaria Business Leadership Initiative led by Ecobank Group and Speak Up Africain in collaboration with the RBM Partnership to End Malaria. Meanwhile, Cameroon launched its national End Malaria Council.

Under the leadership of His Excellency President Kenyatta, who currently chairs the African Leaders Malaria Alliance (ALMA), the Kenyan government confirmed it will distribute insecticide-treated malaria bed nets to households across the country in a nationwide campaign. In Nigeria, a nation that carries the world’s highest malaria burden, pharmacists came together to disseminate information about malaria prevention and treatment with the public. In Uganda, over 50 cyclists of all ages rode against malaria, to raise awareness of the deadly disease.

World Malaria Day activities were also held in a number of partner countries of the United States President’s Malaria Initiative (PMI), which marks its 15th anniversary this year. PMI’s transformative impact in fighting malaria and saving lives is captured in its Annual Report to Congress issued ahead of World Malaria Day.

Sports personalities from around the world also pledged their support to the Zero Malaria Starts with Me campaign.

Wolverhampton Wanderers FC became the first English Premier League club to announce its commitment to the fight against malaria on World Malaria Day. Wolves captain Conor Coady said: “At Wolves we are proud to be supporting the Zero Malaria Starts with Me campaign. Malaria is an entirely preventable and treatable disease but is still killing thousands every year. We hope to raise the profile of this campaign by supporting it as a Premier League football club, in partnership with the Fosun Foundation and Fosun Pharma, and help the many organizations who are working hard to eliminate this deadly disease.”

Portuguese football legend and Zero Malaria champion Luis Figo also congratulated Cabo Verde on achieving three consecutive years of zero local malaria transmission in 2021. This accomplishment puts the island nation located off the West African coast on track to end malaria once and for all.

African stars unite to draw the line against malaria

Meanwhile, Africa’s leading artists lent their voices and creativity to ‘Draw the Line Against Malaria’ – a new youth-focused, Africa-first global campaign – with the ‘Muundo’, a striking universal language created by Nigerian artist Láolú Senbanjo. The language, made up of lines, symbols and patterns, allows people across cultures and continents to add their line to a collective message against malaria. Further talent fronting the campaign include Nigerian musician Yemi Alade, Kenyan Olympian Eliud Kpichoge and South African rugby champion Siya Kolisi, among others.

Siya Kolisi, Captain of the Springboks, South Africa’s World Cup winning rugby team, comments: “Every child, every young person deserves the chance to step into their potential. This is a world changing campaign and we have the opportunity to protect the futures of millions of children across Africa. My message to young people is to get excited and to get involved because this is one disease we can end within a generation. Together we stand and say: Malaria: We’re too strong for you.”

Landmarks lit up around the world to celebrate zero malaria

To celebrate global progress with more countries reaching zero malaria since 2000, several cities illuminated their landmarks in a global relay on Sunday, 25 April at 21h00 local time. These included:

For more information about Zero Malaria Starts with Me or World Malaria Day 2021, please contact the RBM Partnership Press Office on RBMPartnership@grayling.com or call +44 (0) 20 3861 3747.

About Zero Malaria Starts with Me

Zero Malaria Starts with Me campaign was launched by African Union leaders in 2018 in support of the continent’s goal to end malaria by 2030. The campaign, jointly coordinated by the African Union Commission and the RBM Partnership to End Malaria, sparks grassroots movement by engaging political leaders at all levels, mobilising resources and funding, and empowering communities to take ownership of malaria efforts and hold leaders accountable in the fight against malaria. For more information, visit zeromalaria.africa and follow @ZeroMalaria on social media.

About Draw The Line Against Malaria

The Draw The Line Against Malaria campaign aims to inspire and empower young people from across the African continent and the globe to push for political action to end malaria within a generation by adding a personal line of Muundo art to a growing piece of crowdsourced artwork which represents a visual call to action to world leaders.

To Draw the Line Against Malaria this World Malaria Day, visit ZeroMalaria.org and join the conversation on social media by using #DrawTheLine, #ZeroMalaria and #WorldMalariaDay.

World Malaria Day, which takes place on 25 April each year, is an internationally recognized day, highlighting the global efforts to control malaria and celebrating the gains that have been made. Since 2000, the world has made historic progress against malaria, saving millions of lives. However, half the world still lives at risk from this preventable, treatable disease, which costs a child’s life every two minutes. For more information, visit endmalaria.org/worldmalariaday2021 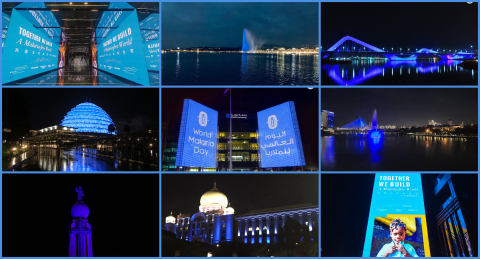 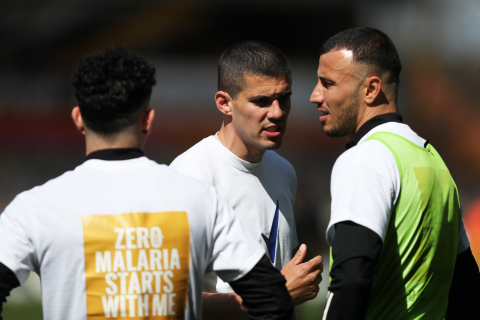 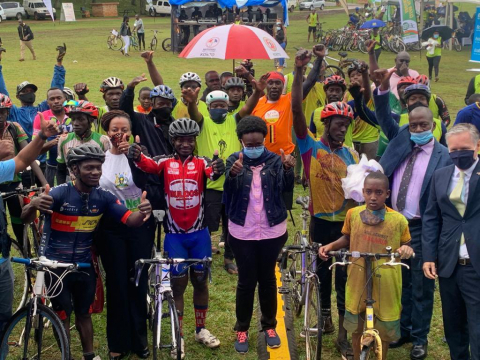 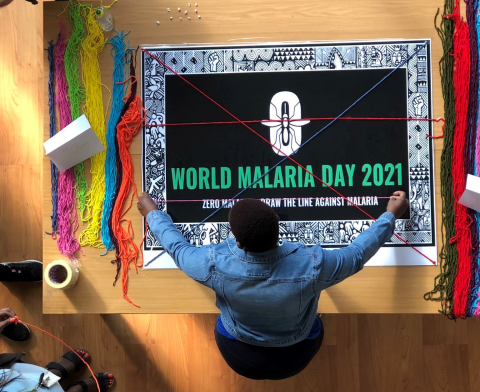