2017 saw a record number of insecticide treated mosquito nets distributed to malaria-affected countries, including 197 million through Global Fund-supported programmes. However, despite a remarkable decrease of 60% in malaria deaths since 2000, there are limits to what can be achieved without increased investment and new tools to end malaria, warns The Global Fund to Fight AIDS, TB and Malaria Results Report 2018 released today.

“The Global Fund has proven a game changer for global public health, and its smart, effective health investments have made a tremendous contribution towards cutting malaria cases and deaths. Today, we need a step change if we are to end malaria—an investment that has proven to be one of the ‘best buys’ in global public health,” says Dr Kesete Admasu, CEO of the RBM Partnership to End Malaria.

“It is alarming that the number of malaria cases is now rising, after declining for more than a decade. While a significant number of countries are on track to eliminating malaria—such as Paraguay, which celebrated certification as malaria-free earlier this year—drug and insecticide resistance, environmental factors, funding shortfalls and demographics pose severe challenges in the highest-burden countries,” according to The Global Fund’s Executive Director Peter Sands.

Core interventions such as life-saving bed nets and anti-malarial treatments are still not reaching all the populations at risk from malaria. An analysis conducted by the RBM Partnership earlier this year found that an extra 136 million insecticide-treated mosquito nets need to be funded in 15 high-burden countries between now and 2020 to fully implement their national malaria strategic plans. In addition, new and improved mosquito nets will be needed to combat growing insecticide resistance.

The Global Fund is the leading international funder of the malaria response, having invested USS$ 10.5 billion in malaria control programs in more than 100 countries since its establishment in 2002. Its next Replenishment Conference will be hosted by France on 10 October 2019.

“To protect the tremendous gains made toward ending malaria, we need a renewed commitment from the international community and malaria-affected countries themselves. A successful replenishment of the Global Fund next year is therefore critical for achieving our collective ambition to end malaria for good,” concludes Dr Kesete. 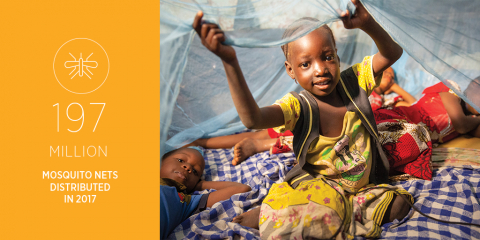