Paris, 5 April 2019 - The world-famous French artist Cyril Kongo has created the official poster for World Malaria Day 2019, which will be marked on 25 April. The poster will take pride of place at an official ceremony, to be held on that date at the Place de l'Hôtel de Ville in the centre of Paris.

Inspired by the theme for this year's World Malaria Day, "Zero Malaria Starts with Me", Kongo’s new work, created in collaboration with the Esprit d’Ebène ("Spirit of Ebony") association and signed by the artist, seeks to bring an artistic dimension to the annual event and to make more Parisians aware of the dangers of malaria and the importance of each person’s commitment to fighting this scourge of humanity. “With a sense of civic purpose, we are fighting against malaria. Zero Malaria Starts with Me,” expresses the artist Cyril Kongo.

Malaria, which is among the oldest and deadliest human diseases, continues to wreak havoc on more than half of the world's population, which remains at risk from it. There were more than 400,000 deaths due to malaria in 2017, according to the latest figures from the World Health Organization. The RBM Partnership to End Malaria and the Global Fund to Fight AIDS, Tuberculosis and Malaria have been instrumental in global efforts to control the disease, saving around 7 million lives since 2000.

The French capital will host a series of events to mark World Malaria Day 2019, aimed at mobilizing decision-makers, the private sector, the scientific community and civil society and stressing the importance of the commitment of France and French-speaking countries to the control of malaria. Five of the eleven nations in the world with the highest malaria burden are French-speaking countries in Africa, and more than 300 million people who lie in francophone countries are at risk of malaria.

The new graffiti-poster, "Zero Malaria Starts with Me", will be an important presence at conferences, exchanges on health issues with Parisians and with the African diaspora in France, and at artistic performances. It will also be printed on a giant mosquito net, which will be unveiled at the Paris ceremony to mark World Malaria Day. The event will be attended by the Mayor of Paris, Anne Hidalgo, the French Minister of Health, Agnès Buzyn, the Director General of the RBM Partnership, Abdourahmane Diallo, the Executive Director of the Global Fund, Peter Sands, and other high-level persons.

World Malaria Day was established by the United Nations General Assembly and is celebrated internationally each year on April 25. World Malaria Day is the culmination of the global commitment to fight this scourge. An official ceremony with global reach is held each year to mark the Day.

The theme chosen for World Malaria Day 2019, "Zero Malaria Starts with Me", aims to re-energize the momentum for a world free from malaria, which is a preventable and curable disease that continues to kill a child every two minutes and to threaten half of the world's population.

The year 2019 marks a crucial step in the fight against malaria. On October 10 the city of Lyon in France will host the Sixth Replenishment Conference of the Global Fund to Fight AIDS, Tuberculosis and Malaria with the goal of securing funding to eliminate these three pandemics by 2030, as envisioned by the UN’s Sustainable Development Goals.

France is a major player in global health. In recent decades, it has distinguished itself by its consistent and repeated commitments to the fight against HIV/AIDS, tuberculosis and malaria, notably through the Global Fund, of which it is the second largest donor, but also as the biggest backer of Unitaid, which is committed to making innovative solutions available in order to improve the prevention, treatment and diagnosis of malaria.

Painting frescoes on walls or canvas holds no secrets for Cyril Kongo, a self-taught painter who has been a leading figure in the world of graffiti art for two decades. Kongo’s talent and know-how have won him contracts with major luxury-goods houses including the Hermès brand, for which he created the renowned "carré graff" ("square graffiti").

Cyril Kongo has always remained faithful to graffiti, which is his first love. He continues to showcase his true artistic identity at festivals in France, Europe and worldwide, working tirelessly for the recognition of this US-born art form.

Cyril Kongo discovered street art as an adolescent when living with his mother (a French civil servant) in Brazzaville (Congo). His college friends of the time made a visit to the United States and came back to Congo with samples of American graffiti. The art form made a huge impression on the young Cyril, who plunged into street art upon his return to France. His talent was quickly noticed and his graffiti took the world by storm. The colourful exuberance of Kongo’s art symbolizes cosmopolitanism and the mixture of races.

In France, Cyril Kongo works with a range of groups and associations to raise awareness of graffiti. Esprit d'Ebène ("Spirit of Ebony") is one such association. Esprit d'Ebène has had a fruitful collaboration with the outstanding graffiti artist since 2014, with specific focus on the fight to eliminate malaria. By designing the poster for World Malaria Day 2019, the artist has affirmed his own commitment to one of the biggest challenges facing humanity today. 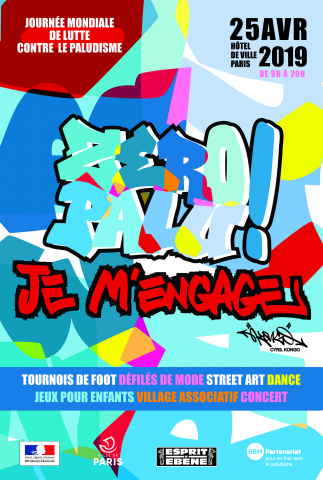