Kigali, Rwanda, Saturday 25 June 2022 - Announced at the culmination of the 26th Commonwealth Heads of Government (CHOGM) meeting, Commonwealth nations have today committed to work towards ending the epidemic of Malaria by 2030. They further agreed to the delivery of the World Health Organization’s (WHO) road map for Neglected Tropical Diseases (2021-2030) including through endorsing the Kigali Declaration on Neglected Tropical Diseases. Finally, they also showed their support for success at the Seventh Replenishment of The Global Fund to Fight AIDS, Tuberculosis and Malaria later this year.

The commitments were contained in the CHOGM communiqué, referred to as “Delivering a common future: Connecting, Innovating, Transforming”. Issued following the conclusion of their 26th meeting, the commitments set a clear path for the Commonwealth nations to work towards ending both Malaria, and Neglected Tropical Diseases (NTDs). This will be crucial ahead of other significant global health oriented events later this year, such as the Seventh Replenishment Conference of The Global Fund to Fight AIDS, Tuberculosis and Malaria.

The commitment made by CHOGM leaders came two days after the Kigali Summit on Malaria and Neglected Tropical Diseases (hereafter ‘Kigali Summit’), convened by the RBM Partnership to End Malaria and Uniting to Combat NTDs and hosted by the Government of The Republic of Rwanda on Thursday 23 June 2022. The Summit was attended by global leaders, led by African Heads of State and made the first in a series of significant pledges to accelerate progress against Malaria and NTDs, with commitments totalling more than US$4.5 billion from governments, international organisations, philanthropists and the private sector. The Kigali Summit’s outcome statement called on leaders, including those at the Commonwealth Heads of Government Meeting, to demonstrate political will to ensure these commitments are delivered. Today's CHOGM communiqué by the 54 leaders is a clear response to that.

Backed by financial, political and scientific research commitments made at the Kigali Summit, the leaders' communiqué injects renewed energy to help put the world back on track towards beating these diseases.

In the fight against Malaria, the Kigali Summit and the CHOGM communiqué represent a vital milestone ahead of the Seventh Replenishment of the Global Fund to Fight AIDS, Tuberculosis and Malaria later this year. WHO’s World Malaria Report 2021 shows that 42% of all funding for Malaria programmes was provided by The Global Fund in 2020. Clear commitment to the Replenishment was shown by leaders attending the Summit. The Government of Rwanda, as host, called on all attending state and non-state actors to ensure that the Global Fund’s Replenishment Conference funding target of at least US$18 billion is met. Eligible Malaria endemic countries demonstrated their leadership by committing domestic funding of US$2.2 billion in 2022 and 2023 as part of their Global Fund counterpart financing, with further increases expected in 2024-2026. In the CHOGM statement released today, the Heads of Government recognised and responded to this call, resolving to continue the fight against Malaria, as well as HIV/AIDS and tuberculosis, and looking forward to the Seventh Replenishment Conference later this year.

On NTDs, His Excellency President Paul Kagame launched the ground-breaking Kigali Declaration on Neglected Tropical Diseases. Endorsement of the Declaration has galvanised political will, ambition and financial commitments and created the momentum to deliver WHO’s NTD road map (2021-2030). The Kigali Declaration has secured substantial commitments from donor governments, endemic country governments, pharmaceutical companies, NGOs and others including over US$1.9 billion in financial commitments, 18 billion tablets donated by nine industry partners and US$562 million in other health products. Whilst these commitments are a step in the right direction, they are nowhere near enough of what is needed to deliver on the entire WHO NTD 2030 Roadmap. Countries and partners that have not yet endorsed the Kigali Declaration on NTDs were urged to do so, and to commit the resources necessary to assure its successful delivery.

The Government of Rwanda has committed to establishing a review and accountability mechanism that will be housed within the Ministry of Health to track progress on the commitments made at the Kigali Summit on Malaria and NTDs and in the CHOGM communiqué, under its Chair in Office role.

The Summit partners are committed to working to end these diseases. They look forward to engaging with the nations of the Commonwealth and their partners to ensure these game- changing commitments in the communiqué are delivered. 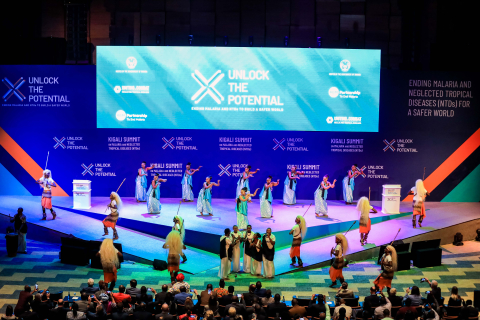