China has now maintained zero indigenous malaria cases for more than three consecutive years, down from 30 million cases per year in the 1940s. It becomes the 40th country or territory to achieve malaria-free certification, following El Salvador in 2021, Argentina and Algeria in 2019, Paraguay and Uzbekistan in 2018, and Sri Lanka in 2016.

Twenty-four countries around the world reported zero indigenous cases of malaria for three or more years between 2000 and 2020. According to the World Malaria Report 2020, 46 countries have fewer than 10,000 malaria cases.

“China’s elimination of malaria proves that continued, tailored innovations can save thousands of lives. The country’s dedication to ending malaria can serve as an inspiration for other high-burden, populous countries that zero malaria can be reached everywhere. Malaria elimination also provides China with the opportunity to step up knowledge sharing and investments in the global fight against malaria, particularly in the Asia-Pacific region and in Africa, which accounts for 90% of the global malaria burden.”

Border surveillance and collaboration with neighbouring countries through regional malaria control initiatives and multisectoral collaboration across 13 ministries were key factors to China’s success.

Partners including the Global Fund to Fight AIDS, Tuberculosis and Malaria played a role in supporting China to scale up the use of life-saving tools – indoor residual spraying, anti-malaria medicines and insecticide-treated nets (ITNs) – as well as training and capacity-building of health workers.

China has also been at the forefront of innovations that have transformed the fight against malaria, including the discovery of artemisinin – today’s first-line treatment globally for P. falciparum malaria – in 1972 by pharmaceutical chemist and later Nobel Prize Laureate Tu Youyou. In the 1980s, China played a crucial role in the development and early rollout of ITNs and remains one of the largest global manufacturers of ITNs today.

In 2012, China also introduced an innovative surveillance and monitoring strategy which has since been adopted by Cambodia, Indonesia, and Thailand, and tailored for country settings among others. The 1-3-7 strategy sets timelines for the diagnosis (1 day), confirmation and risk assessment (3 days) and action to contain all malaria cases (7 days) to prevent the transmission of malaria.

“Today we congratulate the people of China on ridding the country of malaria,” said Dr Tedros Adhanom Ghebreyesus, WHO Director-General. “Their success was hard-earned and came only after decades of targeted and sustained action. With this announcement, China joins the growing number of countries that are showing the world that a malaria-free future is a viable goal.”

On the path to a malaria-free Asia Pacific

The wider Asia Pacific region is on track to eliminate malaria by 2030. For instance, the Greater Mekong Subregion has reduced malaria cases by 97% and deaths by 99% since 2000, offering a model for regional cooperation, data sharing and lesson learning.

Malaria elimination is projected to save over 400,000 lives and avert 123 million malaria cases, translating to almost $90 billion in economic benefits across Asia Pacific[1].

“This is a critical milestone in Asia-Pacific’s drive towards malaria elimination and underpins the importance of cross-border collaboration. China’s ability to tailor innovative approaches in monitoring and surveillance provides crucial lessons and evidence as countries in Asia-Pacific, work to make regional elimination a reality for all by 2030.”

China’s malaria-free certification follows an independent review by the WHO Malaria Elimination Certification Panel in June 2021.

APLMA is an affiliation of Asia and Pacific heads of government, formed to accelerate progress against malaria and to eliminate it in the region by 2030. APLMA was created by the East Asian Summit (EAS) leaders in 2013 to further strengthen anti-malaria efforts, both to help protect hard-won national gains and, ultimately, to defeat malaria in the region altogether. To guide this work, the Asia Pacific Leaders’ Elimination Roadmap sets out the strategic priorities for achieving the 2030 goal. 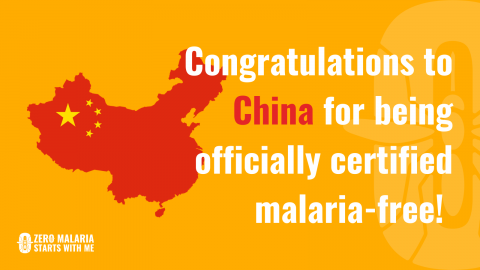