24 February 2021: Geneva/Johannesburg/Kigali/Lagos/Nairobi: Against the backdrop of the COVID-19 pandemic, a new youth-focused creative campaign powered by African stars launches today to ‘draw the line’ against malaria, one of humanity’s oldest and deadliest diseases.

The Draw The Line Against Malaria campaign is fronted by a team of changemakers coming together to inspire young people from across the African continent and the globe to call on their leaders at zeromalaria.org and push for political action to end malaria within a generation.

The campaign launches exactly four months ahead of the Kigali Summit on Malaria and Neglected Tropical Diseases, being held on the eve of the Commonwealth Heads of Government Meeting (CHOGM) in Rwanda on 24th June. The Summit is a milestone moment in the malaria fight and enabler of game changing political decisions including delivering the commitment to halve malaria across the Commonwealth by 2023.

The Draw The Line Against Malaria campaign, which supports the growing Zero Malaria Starts with Me movement, reflects the energy, talent, and cultural influence emanating from the African continent with references to art, fashion, music, sport, and entertainment. The campaign combines an interactive digital platform at zeromalaria.org and is brought to life through a powerful film highlighting young people taking charge of their lives and refusing to allow malaria to steal their futures.

Kenyan athlete and Olympic Gold Medallist Eliud Kipchoge says: “I believe in the power of human potential and our ability to change the world, because no human is limited. Malaria has no place in our lives today. This disease has stolen from us for too long, stopping people from working and children from going to school. Even now, malaria is still taking the life of a young child every two minutes. We can change this, we can overtake this preventable, treatable disease and end it in my lifetime. Join me and let’s draw the line against malaria once and for all.”

The campaign is supported by a host of high-level global talent from Africa including:

Acclaimed Nigerian music video director Meji Alabi directed the campaign film which will be rolled out on channels and platforms across Africa. In the film, the stars are joined by global artist Láolú Senbanjo, and a team of malaria community champions who feature in different scenes to tell the human story of malaria and the devastating impact it has on their education, employment, health, and prospects.

With 74% of Africans now aged under 35, the youth contingent are powerful agents of change and the campaign represents a rallying cry for them to step up action in the fight against malaria which claims the life of a child every two minutes.

At the heart of the campaign is a fresh new universal visual language made up of lines, symbols, and patterns, the ‘Muundo,’ created by Láolú Senbanjo, global artist from Nigeria and Art Director for the Draw The Line Against Malaria campaign.

The language is a beautiful, eye-catching visual representation of the actions that are needed to end malaria once and for all within a generation from cutting-edge technology and innovations to increased investment and bold political actions.

The campaign asks people everywhere to visit zeromalaria.org and add a personal line of Muundo art to a growing piece of crowdsourced artwork which represents a visual call to action to world leaders. The artwork will be shared with leaders at the Malaria and NTDs Summit on 24 June 2021.

Láolú Senbanjo says: “Malaria is something that millions of people across Africa have to deal with. We know the amount of time malaria steals from our lives.  That’s why I’m honored to be using my art, the Sacred Art of the Ori, to create the Muundo, the world’s first malaria language as a fresh expression of our opportunity to end this disease. Join me, draw your own line next to mine as a symbol of support for Zero Malaria.”

Daniël Sytsma, Chief Design Officer, Isobar & Creative, dentsu says: “We worked with creators and makers from across Africa to design this campaign as a movement, one that celebrates the creativity and positivity from a generation that is ready to claim their future. With the Muundo we want to provide young people with the tools and the language to deliver a powerful message.”

The Draw The Line Against Malaria campaign launches against the backdrop of the COVID-19 pandemic. Although 90% of life-saving malaria prevention campaigns were delivered as planned in 2020, the World Health Organization (WHO) has warned that disruption to malaria diagnosis and treatment could lead to thousands of additional deaths across the African continent.

Before the COVID-19 pandemic half of the world’s population were already living with the threat of malaria and, despite promising progress since the beginning of the millennium, the parasite is fighting back. Indeed, the most recent WHO World Malaria Report, shows that now is not the time to step away with 229 million new infections and over 400,000 malaria deaths reported in 2019. The vast majority of these deaths are young children under five across Sub-Saharan Africa.

Dr Abdourahmane Diallo, CEO of RBM Partnership to End Malaria says: “Countries held the line on malaria during 2020 – and this year we must draw the line for good. Long-time investments in the malaria fight continue to pay dividends and are pulling double duty during the pandemic. By strengthening our health care systems, we can better respond to both new and existing health threats.

“Together, we can end malaria, and today’s youth can be the generation that rids the world of this ancient and deadly disease and achieves a malaria free future for all. Today, we must all draw the line against malaria and recommit to achieving zero malaria in Africa and around the world.”

Unifying communities and leaders everywhere, the Draw The Line Against Malaria campaign aims to inspire a new generation to join the Zero Malaria Starts With Me movement, supporting the African Union’s (AU) Catalytic Framework to end AIDS, TB, and Eliminate Malaria in Africa by 2030, and ALMA’s Malaria Youth Army.

Dr Elvis Ikechukwu Eze, a young medical doctor and malaria youth champion from Nigeria says: “In terms of inequality, we know that malaria prevents more children from going to school than you can imagine. Getting an education is the first step to success and a good life. Malaria continues to deprive Africa of its prosperity and economic potential. The more we make efforts to eradicate malaria now, the more our future will be preserved in many ways.

“If my generation looks around, they will see how malaria affects them. We must unite to defeat this disease once and for all. We can educate ourselves, inform our friends and work within our communities to get rid of them locally. We must ensure that no avenue is overlooked to eradicate malaria.” 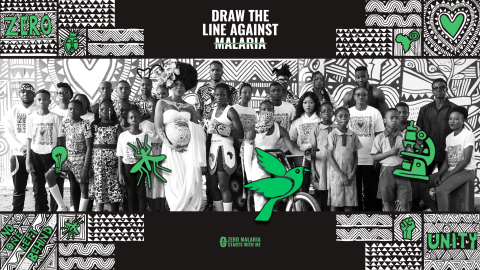