Zero Malaria Starts with Me campaign empowers Africans to take a stand in the fight against the deadly disease.

Monday 2 July 2018 – Today marks the launch of Zero Malaria Starts with Me, a continent-wide campaign co-led by the African Union Commission and the RBM Partnership to End Malaria, and supported by African leaders, that will get more people involved in the fight against the disease that kills over 400,000 Africans every year.

Following reports that malaria cases have increased for the first time in more than a decade, Zero Malaria Starts with Me seeks to reignite a society-wide movement to get back on track efforts that contributed to a 60% decline in cases and saved an estimated 7 million lives since 2000, and to help meet the goal of eliminating malaria across Africa by 2030.

The campaign, unveiled Sunday during the AIDS Watch Africa Meeting at the 31st African Union Summit by President Macky Sall of Senegal and King Mswati III of Eswatini and endorsed by 55 (TBC) African Heads of State and Government today, empowers communities to take greater ownership of malaria prevention and care, and to mobilise additional resources for the effort.

“The African continent accounts for over 90% of the global malaria burden. It is in this context that we have launched the “Zero Malaria Starts with Me” campaign, a continent-wide public-facing campaign for a malaria-free Africa. The campaign will reignite grassroot movements in which individuals, families, communities, religious leaders, private sector, political leaders, and other members of society pledge to take responsibility in the fight against malaria.”

Inspired by Senegal’s nationwide campaign of the same name launched in 2014, Zero Malaria Starts with Me is now being rolled out across the African continent to encourage all citizens – political, business, community and religious leaders, as well as individuals, families and communities – to make a personal commitment to ending malaria for good.

To date, over 20 African nations have committed to join in supporting the campaign, with presidents of Uganda, Zambia and Mozambique already launching nationwide campaigns that include large-scale bed net distribution drives to establishing high-level national End Malaria Councils and parliamentary groups on malaria. Others, including the First Ladies of Ghana and Niger, have pledged to do more to engage leaders and communities to fight malaria in their countries.

“In my country, malaria has long been a major public health concern threatening the socio-economic development and structural transformation trajectory that has put our country on a firm path to sustainable development. It is through national ownership, shared responsibility and global solidarity that we can defeat malaria for good.”

“This campaign further reinvigorates our commitment to eliminate malaria in Africa as we now call upon all our people at all levels to work with us in ridding our continent of this scourge. I urge all governments to invest more in fighting the disease, however the success of this campaign will depend on partnerships and on collaboration across sectors and amongst our population, for as government, we cannot win this fight against malaria alone.”

The campaign offers simple tools to increase community participation in malaria elimination efforts, keep pressure up on leaders to stay committed to ending the disease, and forge new partnerships that can contribute additional funding that will increase access to treatment, improve diagnosis and prevention against the deadly disease. Campaign resources are provided via a Zero Malaria Starts with Me toolkit available at www.zeromalaria.africa.

To arrange an interview or briefing please contact the RBM Partnership press office at Grayling on RBMPartnership@grayling.com or call +44 (0) 20 3861 3747.

“Many African countries are implementing the Africa Health Strategy to strengthen health systems and to achieve universal health coverage. Significant global solidarity, shared responsibility, multisectoral partnerships at various levels and community agency have been key levers to change the game of addressing the three epidemic diseases – AIDS, TB and malaria – on the continent. However, efforts to end malaria in Africa are at the crossroads. The 2017 World Malaria Report signalled that, for the first time in more than a decade, progress against malaria on the African continent has stalled.”

Kesete Admasu, CEO of the RBM Partnership to End Malaria:

“The greatest threat to the fight against malaria is inaction and complacency. We can be the generation to end this debilitating disease. Zero Malaria Starts with Me campaign seeks to build a winning coalition to end malaria in every country, bringing together partners from every sector. Zero Malaria starts with me, with you and with all of us.”

"In order to eliminate malaria in Africa, collective awareness is more than necessary and urgent. I salute the initiative "Zero Malaria Starts with Me" and encourage everyone to get involved so that together we can overcome this scourge."

“Zero Malaria Starts With Me is exactly the type of African owned and African led best practice that will accelerate our progress towards malaria elimination.”

The RBM Partnership to End Malaria is the largest global platform for coordinated action against malaria. Originally established as Roll Back Malaria (RBM) Partnership in 1998, it mobilises for action and resources and forges consensus among partners. The Partnership is comprised of more than 500 partners, including malaria endemic countries, their bilateral and multilateral development partners, the private sector, nongovernmental and community-based organisations, foundations, and research and academic institutions.

About the African Union

The African Union spearheads Africa’s development and integration in close collaboration with African Union Member States, the Regional Economic Communities and African citizens.  AU Vision An integrated, prosperous and peaceful Africa, driven by its own citizens and representing a dynamic force in global arena.
www.au.int

Created at the Abuja 2001 Special Summit, AIDS Watch Africa (AWA) is an Africa-led instrument to stimulate leaders into action and mobilize the resources needed to address AIDS, TB and Malaria in an effective, sustainable and accountable manner. www.aidswatchafrica.net 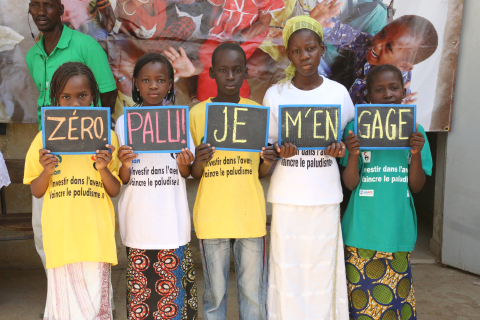