Over $US 4 billion in funding committed at major global summit by governments, private sector and international organisations

Kigali, Rwanda, 23 June 2022 - Global leaders led by African Heads of State have today announced the first in a series of pledges to accelerate progress against Malaria and Neglected Tropical Diseases (NTDs) at the historic Kigali Summit on Malaria and NTDs.

Hosted by His Excellency Paul Kagame, President of the Republic of Rwanda, the Kigali Summit featured commitments totalling more than $US 4 billion including funding from governments, international organisations, philanthropists, and private sector support. In addition, 18 billion tablets have been donated by pharmaceutical companies for preventing and treating NTDs.

In response to the urgent threat of a resurgence in Malaria and NTDs made worse by a plateauing of funding, biological challenges and the COVID-19 pandemic, following many years of progress, endemic countries delivered robust pledges at the Summit to demonstrate leadership and action to accelerate progress towards eliminating these diseases by 2030 and galvanise political will.

Malaria and NTD affected countries committed over USD 2.2 billion in domestic resources towards ending these diseases. These commitments were made in the context of both the Kigali Declaration for NTDs launched today, and a signal of further enhanced domestic resource commitments for Malaria at the forthcoming Global Fund Replenishment.

With endemic countries demonstrating their leadership and ownership in the fight against Malaria and NTDs, now is the time for international solidarity to ensure we all work together across all partners and levels to meet the ambitious targets.

His Excellency Paul Kagame, President of the Republic of Rwanda said:

“Ensuring that all African countries mobilise the domestic financial resources required for quality healthcare, is a priority for the African Union, and our partners.

If there is one thing the pandemic has taught us, it is that together, through coordinated and collaborative action, we can achieve much more.”

Countries called on other global leaders to join them and demonstrate their support by endorsing and committing resources to the Kigali Declaration on NTDs and mobilising at least USD 18 billion for the Malaria response at the Global Fund’s
Seventh Replenishment Conference in September.

A speech by HRH, The Prince of Wales at a Summit on Malaria and Neglected Tropical Diseases at Intare Conference Hall, Rwanda is available here.

An excerpt from the speech:

“While we have achieved so much in the Malaria campaign since 2000, I am afraid that largely due to the Covid-19 pandemic there remains a great amount to do if our ambitions are to be met. I can only hope that today’s meeting signals the necessary focus, and prioritization, of funding for novel therapeutic, prophylactic, and vaccine strategies against Malaria.

For example, I understand that the Global Fund to Fight AIDS, Tuberculosis and Malaria reported that 188 million mosquito nets were distributed in 2020 – a seventeen per cent increase compared to 2019, despite Covid-19.  And there is a wider hope – we now have more valuable assets at our disposal than ever before. For example, the first W.H.O. approved vaccine, new nets and modern communications tools to monitor our progress and fight against complacency.

It is encouraging to see that leaders of the Commonwealth will discuss and pledge their support for this campaign and are committed to work towards ending the epidemic of Malaria by 2030.  I very much welcome this determination and that we are not turning our back on a job unfinished.”

Further support for Malaria and NTDs programmes was also delivered by philanthropic foundations and funds, including the Bill and Melinda Gates Foundation.

“Over the past two decades, it has been inspiring to see the way leaders have come together to combat Malaria and neglected tropical diseases,” said French Gates, who spoke at the Kigali Summit.

“African government officials, health workers, advocates, and scientists have contributed to significant reductions in death and other impacts these diseases have on communities. Tremendous leadership and collaboration with multilateral organizations, donor countries, and pharmaceutical companies are saving lives and helping people live to their fullest potential.”

Progress against Malaria and NTDs has stalled in recent years and even reversed in some countries due to a plateauing of funding, rapidly increasing population and widespread insecticide resistance alongside the recent COVID-19 pandemic. This has disrupted health programmes including essential services and supply chains that have put further strain on the fight against Malaria.

“Malaria has afflicted humanity for millennia, but in the past 20 years we have made huge gains, saving many lives. Those gains are now at risk. Without accelerated action, we are in danger of seeing an immediate resurgence of Malaria, particularly in Africa. But we have the tools and the strategy to prevent that – and, with new tools, to start to dream of a Malaria-free-world.”

Achieving a healthier and safer world that is free from Malaria and NTDs requires new investments, strategic partnerships across different sectors data-driven and tailored use of current tools and increased investment in disease surveillance and early warning systems. The announcements made at the Kigali Summit are expected to make a significant contribution to saving the lives and livelihoods of billions of people around the world at risk from these preventable and treatable diseases. 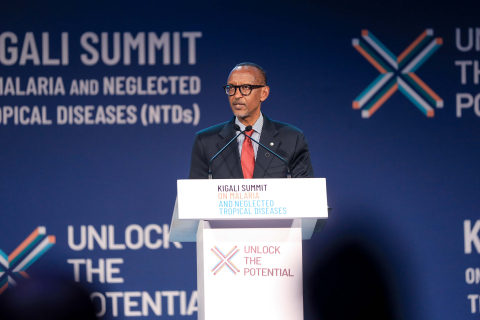