Despite COVID-19 diverting attention from malaria, two-thirds believe they are the generation to end the disease, says new survey released one month before this year’s World Malaria Day, April 25th

25 March 2021 - New research finds that 9 in 10 African youth want to take personal action in the fight against malaria, with almost two-thirds (61%) believing the disease can be eliminated in their lifetimes.

The data shows that youth are most likely to volunteer their time to support malaria control efforts, for example by distributing mosquito nets or supporting community clean-up activities (50%), even ahead of simply sharing information about malaria on social media (45%). A quarter also hope to make a difference by calling on national policymakers (26%) or engaging community leaders (25%) to prioritize malaria.

Nearly 90% of youth in these countries already take preventative measures to protect themselves and their families against the disease, except for South Africa where malaria is less common. In Rwanda and Senegal, which have made significant progress against malaria in recent years, young people aged 18-24 were more than 20 percentage points less likely to have had direct experience with the disease compared to those aged 25-34, showing how country-led action protects young people’s futures. In higher burden countries, the risk did not change between age groups.

Despite their optimism, only a quarter (27%) of youth surveyed believe leaders are doing enough to end malaria. This sentiment was most pronounced in urban areas, where youth are only half as likely to agree policymakers are doing enough (21%) than youth living in rural areas (44%).

The ongoing spread of COVID-19 threatens the malaria response, particularly in the highest malaria burden countries where the rate of progress has slowed in recent years, and the full impact is not yet known. In 2020, frontline health workers and governments, with support from partners, sustained more than 90% of mosquito net distribution and seasonal malaria chemoprevention campaigns in 30 countries, avoiding a worst-case scenario of a doubling of malaria deaths in sub-Saharan Africa in 2020 alone. Despite these efforts, however, the majority of youth – 61% -- feel national attention towards malaria has decreased during the pandemic.

“Health is a human right, not a privilege. No one should get sick and die from diseases that are preventable and treatable. All our efforts in the response and green recovery to COVID-19 need to ensure that other diseases, such as malaria, are not neglected. We must continue to invest in youth-led solutions to combat malaria around the world”.

These findings informed ‘Draw the Line Against Malaria’ – a youth-focused, Africa-first global campaign launched by the RBM Partnership and its partners this year. Supported by African icons in sport and culture, the campaign urges youth across the continent to take their futures back from malaria – a disease which caused 409,000 deaths in 2019 and continues to prevent children from going to school and realizing their full potential.

The survey findings are released one month ahead of World Malaria Day 2021, the global awareness day celebrated on 25th April each year. This year’s theme – ‘Zero Malaria – Draw the Line Against Malaria’ – will celebrate progress achieved by a diverse set of countries who have achieved zero malaria since 2000, encourage a growing number of nations on the cusp of elimination, and re-ignite the movement to end malaria in countries still impacted by the disease.

To mark World Malaria Day, on 21st April, the World Health Organization (WHO) and the RBM Partnership will jointly hold the Virtual Forum on Malaria Elimination. On this occasion, WHO will announce 27 countries and territories that have the potential to eliminate malaria by 2025, as well as review progress towards the achievement of the 2020 global elimination milestone of 10 countries recording three consecutive years of zero malaria cases since 2015. These include Sri Lanka, Uzbekistan and Algeria, as well as El Salvador, the first Central American country to be certified malaria-free earlier this year.

In addition, countries around the world will observe World Malaria Day with their own events, with several countries launching nationwide Zero Malaria Starts with Me campaigns and others illuminating landmarks at 21:00 local time on 25th April in a global relay to celebrate progress towards zero malaria around the world and highlight the urgency of ending this disease everywhere.

“This World Malaria Day we celebrate countries around the globe that have reached zero malaria since 2000, and a growing number of nations that are on the cusp of elimination.

“Yet despite this incredible progress, World Malaria Day must also serve as a crucial reminder for people everywhere that we must accelerate with urgency to fight this preventable and treatable disease that still takes a child’s life every two minutes. Over this past year, COVID-19 has threatened our hard-won progress against malaria, so now more than ever we must make a commitment to end malaria once and for all.”

Ahead of World Malaria Day, the RBM Partnership to End Malaria urges people in Africa and worldwide to Draw the Line Against Malaria at ZeroMalaria.org and join the conversation on social media by using #DrawTheLine, #ZeroMalaria and #WorldMalariaDay.

For more information about the research, the Draw the Line campaign or World Malaria Day 2021, please contact the RBM Partnership Press Office on RBMPartnership@grayling.com or call +44 (0) 20 3861 3747.

Gallup International carried out a nationwide representative survey on Youth Attitudes to the Malaria Fight between 19 February and 16 March 2021. This survey targeted the population aged between 18 years and 34 years living in Kenya, Mozambique, Nigeria, Rwanda, Senegal and South Africa.

About Draw the Line Against Malaria

Draw the Line Against Malaria is a new campaign providing a rallying cry for young people to unite and fight malaria by driving more action, more innovation, more funding and more political leadership to achieve zero malaria within a generation. The campaign builds on the pan-African Zero Malaria Starts with Me movement that shows the power we each have to help end malaria.

Nigerian artist Láolú Senbanjo created the ‘Muundo’, a fresh new universal language made up of lines, symbols and patterns allowing people across cultures and continents to add their line to a collective message against malaria. Further talent fronting the campaign include Nigerian musician Yemi Alade, Kenyan Olympian Eliud Kpichoge and South African rugby champion Siya Kolisi, among others.

Youth in Africa, and people globally, are encouraged to draw the line on the ‘Muundo’ to demand action at zeromalaria.org. 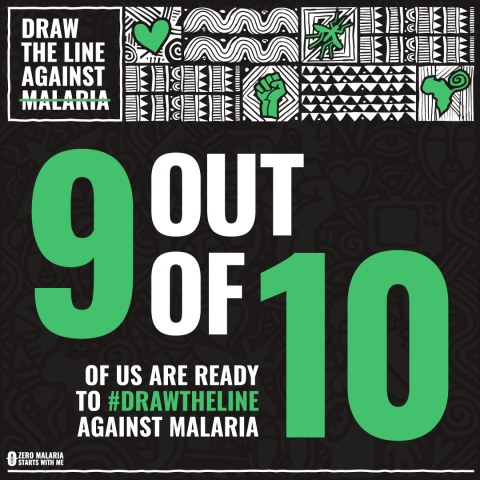 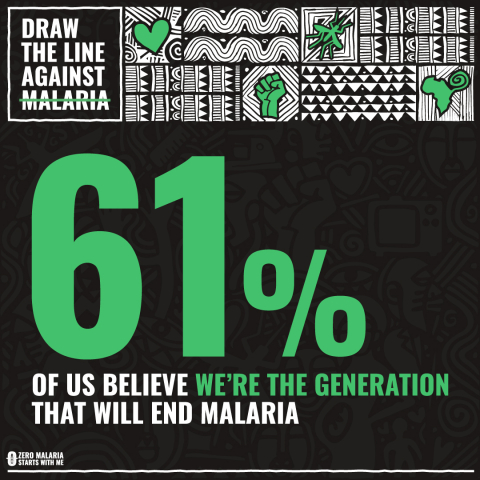