16 January 2020 – The RBM Partnership to End Malaria is leading the global malaria community in celebrating the milestone of 2 billion insecticide-treated mosquito nets (ITNs) delivered worldwide since 2004.

The development and scale up of these nets are responsible for 68% of the malaria cases prevented in Africa since 2000, contributing to global efforts that saved more than 7 million lives and prevented more than 1 billion malaria cases.

A new video highlights the global collaboration it took to boost funding, pioneer, produce, and deliver the insecticide-treated mosquito nets to millions of families around the world living at risk of malaria, a preventable disease that kills a child every 2 minutes.

The film follows the journey of one of the life-saving mosquito nets passed among representatives from the global malaria community including advocates, a scientist, global leaders and malaria-endemic country health workers to reach a family in Nampula, Mozambique, one of 5 countries with the highest burden of malaria. It also features a classroom of young women in Nyanza Province, Kenya, including Clementina Akinyi. Ms Akinyi, now in her last year of high school, grew up sleeping under insecticide-treated mosquito nets, and was photographed as a young child under a mosquito net – an image which became iconic for the fight against malaria.

According to the latest World Malaria Report, between 2010 and 2018, the number of pregnant women and children under 5 in sub-Saharan Africa who slept under an insecticide-treated net more than doubled, up from 26% to 61%.  Each net is typically effective for up to 3 years and 20 washes and, on average, protects two people simultaneously.

Major drivers of this progress include The Global Fund to Fight AIDS, Tuberculosis and Malaria and the U.S. President’s Malaria Initiative (PMI), working together with malaria-endemic countries and partners to distribute more than 1.5 billion insecticide-treated mosquito nets. Many other governments, notably the UK, and organisations, including UNICEF, International Federation of the Red Cross and Red Crescent Societies (IFRC), the World Bank, and the UN Foundation’s Nothing But Nets initiative and Against Malaria Foundation, also made significant contributions to the 2 billion net milestone.

“Insecticide-treated nets have saved lives, prevented suffering and brought us 2 billion steps closer to our vision of a malaria-free world. With country leadership and global partnership, they will continue to play a vital role in fulfilling that vision.”

“The milestone of delivering 2 billion life-saving nets is a hallmark example of effective global partnership and sustained commitment over the past two decades. As we enter a new decade, we must now step up action to meet the ambitious global targets of further reducing malaria deaths and cases significantly by 2030. Political commitment and engagement from all levels of society will be crucial to ensure we reach those most vulnerable – pregnant women and children under 5 in sub-Saharan Africa – who still suffer from malaria with life-saving mosquito nets. Equally, we need to continue investing in developing, testing and scaling up nets with new insecticides and active ingredients to stay ahead of the evolving mosquito.”

“This is a great milestone. With increased domestic and international investment, we can help close the gap and make sure everyone at risk for malaria has an insecticide-treated net – breaking the transmission cycle and helping more countries on the path to elimination.”

“Insecticide-treated nets are one of the most effective and affordable tools in the fight against malaria. But to fully realize their potential and mitigate the threat of insecticide resistance, we need to work together to harness the power of data--to ensure people who need them most receive the right nets, at the right place, at the right time. We also need to continue investing in new tools and fostering healthy marketplaces for innovation.”

“I don’t fall sick because I’m using the nets. Me and my sister are now champions for mosquito nets, and we are now advising people at school to use the nets. I advise everyone to use nets to prevent malaria, because malaria is a deadly disease.”

While current evidence suggests that nets treated with pyrethroid insecticides continue to be effective against the mosquito, resistance to pyrethroids – the only insecticide class currently used in ITNs – is widespread and highest in the WHO African Region.

To combat insecticide resistance, partners are developing, testing and scaling up nets with new insecticides and harnessing data to better target where to distribute current and new nets. Some of the new nets, which include combinations of insecticides and other active ingredients, have been approved by WHO while others are being piloted to build the epidemiological evidence needed for their public health value to inform WHO policy recommendations and to assess the cost-effectiveness of the nets under pilot conditions.

The Innovative Vector Control Consortium (IVCC) leads implementation of the pilot New Nets Project which began in 2019 in Burkina Faso and will expand in 2020 to Côte d’Ivoire, Mali, Mozambique, Nigeria and Rwanda. The pilot project is funded by the Global Fund and Unitaid. The Bill & Melinda Gates Foundation and U.S. Agency for International Development are providing supplementary funding. Funding for PMI in 2020 includes an additional US$15 million to invest in the use of mosquito nets treated with new types of insecticides. And, in October 2019, MedAccess and the Bill & Melinda Gates Foundation announced an agreement with a mosquito net manufacturer to accelerate the availability of 35 million new nets, which is expected to help lower prices and further increase the use of these tools.

Between 2006 and 2017, the mosquito net market increased fivefold with prices falling from approximately $4.50 to $2, greatly increasing value for money and significantly expanding net coverage from 5.5 million in 2004 to almost 200 million in 2018.

To arrange an interview with a representative for an organisation referenced in this press release, please contact the RBM Partnership press office at Grayling on RBMPartnership@grayling.com or call +44 (0)20 3861 3747.

This video marking the announcement is available for media outlets to use and share, with credit to the RBM Partnership to End Malaria. Pre-recorded interviews with the below spokespeople and case studies are also available on request.

To support this major milestone for global health and to engage in the celebration online, social media users can use #EndMalaria and #zeromalariastartswithme. 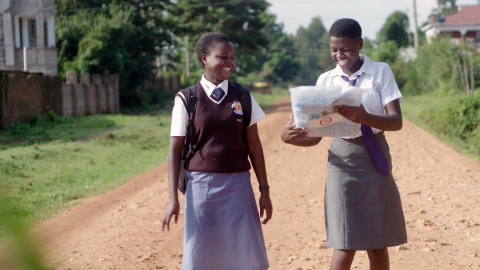