The global fight against malaria since 2000 has been one of public health’s greatest triumphs, saving nearly 7 million lives and preventing over one billion cases. However, that progress has recently stalled. While the coverage of anti-malarial interventions has never been higher, the number of malaria cases is no longer decreasing. Population growth among the most affected groups in the highest burden countries, unpredictable and severe climate patterns, the proliferation of new mosquito breeding sites alongside agricultural and industrial developments, and the biological threats of insecticide and drug resistance must be addressed to overcome this stagnation and set the world back on track to ending malaria for good.

The progress since 2000 and the ambition to end malaria was achieved through:

What we need now are:

To address these challenges and explore successful pathways for improvement, the RBM Partnership to End Malaria, together with the World Health Organization, Unitaid, Business Alliance Against Malaria, and the US President’s Malaria Initiative are convening a panel discussion on the multisectoral innovation, collaboration, and scale needed to end malaria. The moderated discussion will explore: 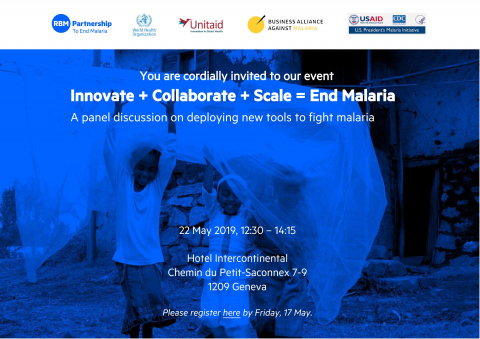